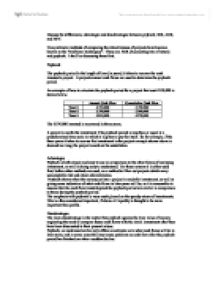 Discuss the differences, advantages and disadvantages between payback, IRR, ARR, and NPV.

Discuss the differences, advantages and disadvantages between payback, IRR, ARR, and NPV. Two particular methods of comparing the attractiveness of projects have become known as the "traditional techniques". These are ARR (Accounting rate of return) and payback. I shall be discussing these first. Payback The payback period is the length of time (in years) it takes to recover the cash invested a project. A projects annual cash flows are used to determine the payback period. An example of how to calculate the payback period for a project that cost �570,000 is shown below. Annual Cash Flow Cumulative Cash Flow Year 1 �150,000 �150.000 Year 2 �190,000 �340,000 Year 3 �230,000 �570,000 The �570,000 invested is recovered in three years. A project is worth the investment if its payback period is less than or equal to a predetermined time scale in which it is given to pay for itself. So for example, if the three years it takes to recover the investment in the project example shown above is deemed too long, the project would not be undertaken. ...read more.

One of the many formulas to work out ARR is as follows: Average Annual Profit Average Investment An example of how to work out the ARR of a project is shown below. Investment Year 0 -1000 Net Cash Inflow Yr1 350 Yr2 350 Yr3 350 Yr4 350 Yr5 350 Total Cash Inflow 1750 Total Net Profit Over 5 Years 150 The ARR of the project shown above is therefore: 150 x 100 = 15% 1000 A project is thought to be worth the investment if the ARR is greater than, or equal to, a predetermined hurdle rate. Advantages The main advantage, and basically the only real reason that ARR is still used by many organisations for project evaluation, belongs to the fact that many organisations are often analysed in this way, as well as management being evaluated in this way. Due to this, managers have a natural tendency to use this ratio. Other reasons for its continued use include the fact that it takes into account all of the cash flows, along with its simplicity to calculate and understand. ...read more.

.658 �144,760 Year 4 �224,000 .572 �128,128 Total �547,028 Amount to be invested �560,000 Net present value -�12,972 Because the net present value is negative it is rejected, as the general rule of thumb is that a project is only acceptable if it has a positive NPV. If two projects are being considered the one with the higher NPV should be accepted. IRR IRR (Internal rate of return) can be defined as the discount rate that gives zero NPV. This method of project analysis is commonly used in finance, and whilst it is a useful measure it should also be noted that IRR can sometimes be a misleading measure, and it is therefore important to calculate and analyse it properly. The formula used to calculate IRR for a project that is purchased over n years is shown below: F0 + F1 + F2 + . . . + Fn = 0 1+r (1+r) 2 (1+r)n However, except by chance the IRR cannot be found directly. It can either be found by drawing a graph known as a present value profile or, more commonly, by calculations involving linear interpolation. ...read more.