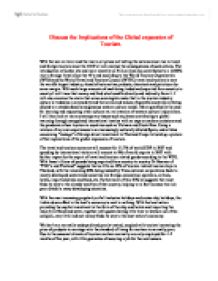 Discuss the Implications of the Global expansion of Tourism.

Discuss the Implications of the Global expansion of Tourism. With the war on terror and the rise in oil prices not halting the astronomical rise in travel and foreign tourism since the 1940's I will analyse the consequences of such actions. The introduction of jumbo jets and more recently no frills airlines has contributed to a 1,000% rise in foreign travel since the 40's and according to the World Tourism Organization (WTO) and the World Travel and Tourism Council (WTTC) travel and tourism is now the world's largest industry, ahead of automotive products, chemicals and petroleum by some margin. With such large amounts of cash being traded and exported from country to country I will trace that money and find who benefits directly and indirectly from it. I will also examine the claim that some sociologists make that in the tourism industry culture is traded as a commodity and the norms and values of specific countries are being diluted to a standardised homogeneous western culture model. More specifically the case for learning and respecting other cultures vs. an invasion of western cultural imperialism. ...read more.

After the rise of tourism came the rise of sex tourism which is almost according to the, EU sex tourism council, is almost always a male from a developed country visiting a developing country. It is a criminal offence in most developed countries to be a sex tourist and the implication of funding such activities in third world countries can mean the government becomes dependant on the industry and does little to stop such practices. Through the expansion of sex tourism more and more people are exploited year on year and this makes the host countries become more lenient with the law as they grow dependant on such practices. A further implication of the expansion of tourism according to some sociologists is that culture is traded as a commodity in that the real culture of a society has already been lost to a standardised homogeneous western culture model. Using my own experiences of Spain I feel that the norms and values of specific countries are being diluted with an invasion of western cultural imperialism. British ex pats and a bombardment of American norms and values has cheapened the area and I feel Spain has lost its soul. ...read more.

and exporting most of the wealth created by them in host countries I feel that the potential for accelerated growth in that country is outweighed by the poor treatment. Referring to the Andorra example such sometimes necessary poor treatment, in my opinion, can be justified for such accelerated economic growth and increased living standards. With a closer look at the benefits of the global expansion of tourism I feel that in general the implications of tourism on the culture of its destination are small. With such a big invasion of western cultural imperialism from the media and internet I feel that the impact of tourism on culture is actually a positive one. For example the money spent by tourists in Kenya helping to fund wildlife reserves and a anti poaching wing of the police. In conclusion I feel that the implications of the global expansion of tourism are sometimes arguably bad influences on most people except the large western TNC's that operate them. However if you look into more detail on the subject I found that under the surface of poor morals by the TNC tour operators a story of employment and growth in poor host countries has outweighed that treatment. ...read more.