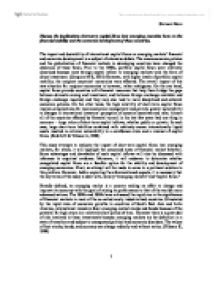 Discuss the implications short-term capital flows into emerging countries have on the financial stability and the economic development of those countries.

Discuss the implications short-term capital flows into emerging countries have on the financial stability and the economic development of those countries. The impact and desirability of international capital flows on emerging markets' financial and economic development is a subject of extensive debate. The macroeconomic policies and the globalization of financial markets in developing countries have changed the dynamics of these flows. Prior to the 1990s, portfolio capital flows went relatively unnoticed because most foreign capital inflow to emerging markets took the form of direct investment. (Campion M K, 2001) However, with higher levels of portfolio capital mobility, the recipient countries' economies were affected. The overall impact of this new situation for recipient economies is however, rather ambiguous. On the one hand, capital flows provide countries with financial resources that help them bridge the gaps between domestic saving and investment, and between foreign exchange available and foreign exchange required; and they may also lead to more disciplined and coherent economic policies. On the other hand, the high volatility of short-term capital flows implies complications for macroeconomic management and permits greater vulnerability to changes in international investors' perception of country incentives and risks. Almost all of the countries affected by financial turmoil in the last few years had one thing in common - large ratios of short-term capital inflows, whether public or private. In each case, large short-term liabilities combined with relatively scarce internationally liquid assets resulted in extreme vulnerability to a confidence crisis and a reversal of capital flows. (Rodrik D & Velasco A, 1999) This essay attempts to evaluate the impact of short-term capital flows into emerging markets, for which, it will highlight the concerned areas of financial market behavior. Some advantages and drawbacks of such capital inflows will also be discussed with reference to empirical evidence. Moreover, it will endeavor to determine whether unregulated capital flows are a feasible option for the stability and development of emerging economies. ...read more.

(Rodrik D & Velasco A, 1999) Moreover, there is always a risk of sudden reversals, which are inclined to lead to serious financial difficulties for the country concerned building up high costs in terms of investment and output. Evidently, it can be argued that the benefits posed by the capital inflows are subsequently over-shadowed by the problems it creates. In practice, financial liberalization, that was expected to benefit the financial global system, created conditions in which hedging operations and other speculative currency transactions gave rise to exchange rate instability and currency depreciation with disastrous economic consequences. Eatwell (1997) cited some 'expected' benefits that did not materialize. Firstly, financial liberalization aimed a better allocation of resources, moving capital from rich to poorer countries. Secondly, more opportunities for savers and lower costs for borrowers have been upset by higher real interest rates. Thirdly, the overall performance in investment and growth has not improved. Fourthly, the development of new instruments of investment (e.g. future contracts), created new systematic risks, instead of improving risk management. (Rodriguez Y, 2000) Developing countries are still struggling to find their way in the global financial system. World Bank (2000) stated that past episodes of surges in capital flows to emerging markets have all ended in severe international financial crises. The large amount of capital inflows almost always comes as a package deal with financial instability. Focusing the attention on financial crises, a series of them have occurred over the last two decades, and have seriously hampered the process of economic development. It almost seems that the developing world has just been moving from one crisis to the next. Latin America experienced its capital market crisis in December 1994, South East Asia faced its crisis in the summer of 1997, and then Russia troubled all financial markets in 1998. Losses of output, unemployment, bankruptcies, and currency devaluation have marked these crises. Mussa et al (1999) ...read more.

However, in practice, capital controls have debatable effects. Some external imbalances have roots in sources other than capital movements and, therefore, the imposition of capital restrictions cannot be expected to mend the situation. (Sweeny J.R and Reis P.C, 1997) Malaysia recovered from the Asian financial crisis swiftly after the imposition of capital controls in September 1998. The fact that Korea and Thailand recovered in parallel has been interpreted as suggesting that capital controls did not play a significant role in facilitating Malaysia's rebound. However, the financial crisis was deepening in Malaysia in the summer of 1998, while it had significantly eased up in Korea and Thailand (Rodrik D & Kaplan E, 2001). Thus, based on past experiences capital controls can be offered as a solution to crisis, depending upon the external environment of the country. However, such controls also have their own drawbacks which have raised issues in the past. In conclusion, short-term capital inflows can be said to have grown faster than any other type of investment. The overall impact in recipient economies has been ambiguous. However, with reference to the recently experienced crises, large unregulated short-term flows have only proved to be volatile in nature, disturbing the economic and financial stability of the emerging nations. A clear pattern is identified, where short-term inflows are eventually reversed sharply causing currency crisis, banks and enterprises bankruptcies, dramatic reductions in output and economic activity in general. The benefits obtained by recipient countries were in many cases impaired by the dramatic outflows of capital. The expected progress to be brought about with financial liberalization was certainly not attained. Tobin (1997), cited in Rodriguez Y (2000), states that "experience has not, not yet anyway, vindicated current orthodox confidence that free global financial markets are the keys to global prosperity." Capital controls are proposed as a probable solution for developing markets in order to reduce the euphoria and the erratic ebbs, flows, and volatility of capital. What is essential is that policy negotiations keep sight of fundamental principles and remember that the financial system must serve the needs of the world economy, not the other way around. ...read more.