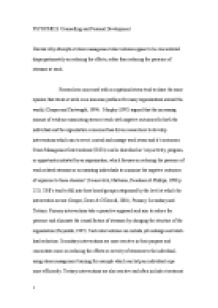 Discuss why attempts at stress management interventions appear to be concentrated disproportionately on reducing the effects, rather than reducing the presence of stressors at work.

﻿PSYOCMO23: Counselling and Personal Development Discuss why attempts at stress management interventions appear to be concentrated disproportionately on reducing the effects, rather than reducing the presence of stressors at work. Researchers concerned with occupational stress tend to share the same opinion that stress at work is an immense problem for many organizations around the world, (Cooper and Cartwright, 1994). Murphy (1995) argued that the increasing amount of evidence associating stress at work with negative outcomes for both the individual and the organization concerned has driven researchers to develop interventions which aim to avert, control and manage work stress and it?s outcomes. Stress Management Interventions (SMI?s) can be described as "any activity, program, or opportunity initiated by an organization, which focuses on reducing the presence of work-related stressors or on assisting individuals to minimize the negative outcomes of exposure to these stressors" (Ivancevitch, Matteson, Freedman & Phillips, 1990 p. 252). SMI?s tend to fall into three broad groups categorised by the level at which the interevntion occurs (Cooper, Dewe & O?Dricoll, 2001); Primary, Secondary and Tertiary. Primary interventions take a proactive approach and aim to reduce the presence and eliminate the causal factors of stressors by changing the structure of the organization (Reynolds, 1997). Such interventions can include job redesign and work-load reduction. ...read more.

have in fact been ?repackaged? as stress management interventions (Briner, 1997), which could explain why this form of intervention is so prevalent. Research and evaluation can have an effect on the proportion of interventions which concentrate on reducing the presence of stressors rather than the effects of stress. Munz, Kohler & Greenberg (2001) noted that there is a clear lack of information regarding the benefits of different types of SMI?s. Giga, Noblet & Cooper (2003) argue that this due to a lack of rigourous research aimed at testing the effectiveness of stress management strategies. This could indicate that attempts to minimize the effects of stress at work are restricted to a certain extent by a scarcity of sound evidence This could infer that organizations are lacking reliable evidence regarding which type of intervention is likely to be most effective, therefore they are likely to choose the intervention which appears to work well and is the easiest to implement. For this reason, it is clear to see why counseling and psychotherapy services are so popular; they do appear to be improving workers? psychological well-being, regardless of whether the presence of stressors are being tackled or whether there will be long-term benefits (Reynolds, 1997) Reynolds also noted that the existing systematic evaluations of work stress interventions have focussed on individually orientated schemes, which only deal with the presence of stressors. ...read more.

Stress Management Interventions appear to be focussed more on reducing the effects of stressors at work than actually aiming to reduce the presence. The reasons for this disproportion are certainly not exhaustive which makes such a discussion particularly difficult. Organizations are such complex structures it is difficult to argue convincingly this disproportion exists, however it can be suggested that the lack of rigourous research in the field, the complexity of understanding and restructuring an organization and the financial and time implecations of doing so, all hinder the likelyhood of an organization choosing to tackle the presence of stress. Conversely, secondary and tertiary interventions appear very attractive to an organization despite their limitations; they can be implemented fairly quickly and efficiently, show immediate results and appear to offer a panacea for mananging stress. In a fast moving, money conscious organization with numerous other demands, the claims made my the stress management industry seem very appealing, which is why such interventions are so popular. Although the concept of removing the presence of stressors is often the ultimate goal of an organization there is a clear lack of sound evidence supporting the concept of this being possible. Therefore until theory and research develop in this area, the band-aid that is secondary and tertiary interventions will remain popular. ...read more.