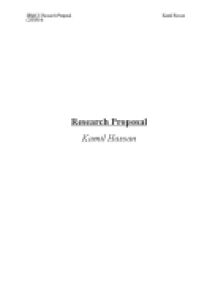 Dissertation proposal - Is Hosting the London 2012 Olympics a beneficial choice for the UK Economy?

﻿288ACC Research Proposal Kamil Hassan (2592914) Research Proposal Kamil Hassan Is Hosting the London 2012 Olympics a beneficial choice for the UK Economy? The Olympics games is coming to London from 27th June (Opening ceremony) right up until 9th September (Paralympic games closing ceremony). Such a big event will bring a vast amount of sporting luxuries to the residents of England and especially London. The competitiveness, fellowship and support that Olympic Games boast will definitely light up the UK socially. But also economically the Olympic Games will bring a lot of positive and negative aspects. Although all you hear is positivity and how exciting the prospects of the UK hosting the games is and the amazing experience it will bring to the residents of the country, it will be interesting to investigate whether it will be economically efficient and the right choice for the UK to have taken. Furthermore it will be interesting to find out what benefits or problems will be left for the UK Economy after the Olympic Games have finished. I have always been intrigued by sports and sporting events being a keen sportsman myself. ...read more.

This is a very good Economic benefit to the UK as it will help reduce unemployment rates across the country. In fact 9% of the 30,000 jobs were filled by unemployed residents of the UK. This will have cut the unemployed in the country by 2700, its not a vast amount but will little by little help the UK fight unemployment. Research has been done by Price Water Cooper house (PWC) in measuring the total economic impact of the Olympic games by looking at direct impact (purchases that game organises have made in preparation and execution of Games), indirect impact (these are found in the goods and service industries that supply industries that receive expenditure from game organisers) and Induced impact (generated through the spending from people employed indirectly or directly by the Games expenditure). This research will help gain an overall costing figure of all the revenue and costs the Games will generate in relation to consumption and spending. As a lot of research and reviews show the full extent to the Economic issues around the London 2012 Olympic Games hasn?t been delved into, only the main have been addressed. ...read more.

A different and new overview could be gained on this project through using the existing PESTLE analysis; this will help see all the different aspects the games will cause. Not necessarily all economic aspects but they will help induce Economic reasoning and help explain how these could affect the UK economy as a whole. A final key inclusion within this project would be the utilisation of graphs, they will help compare figures quickly and accurately and give a visual implication on issues and whether they will be beneficial for the UK economy or not. An example could be drawing up graphs on the percentage of people leaving England whilst the games are on in comparison to the amount of people entering the UK to analyse loss of spending in comparison to gained spending in the Economy. This project will all in all help the UK have an outlook on whether the London 2012 Olympic will be a beneficial decision economically for the UK to take. It will help weigh up all the economic issues that will be beneficial during the Games, but also what economic issues the UK need to plan for in the future post the Olympics. ...read more.