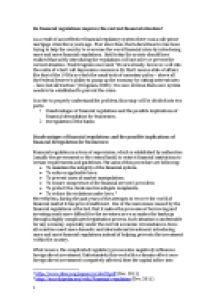 Therefore, it is not to say that from now on we should implement no regulations at all, in fact a new system that can bring hope to the financial market is desired. Consequently, the problem does not lie in the regulations themselves but in the regulatory regime as a whole. Therefore the deregulation of the banks might be a solution to the deep recession. Deregulation of the banks The aftermath of pretty much every crisis is the introduction of various financial regulations by governments and central banks in order to help the situation. Unfortunately this process has not turned out to be effective. Therefore, instead of implementing more and more regulations, the authorities should try to deregulate the banks and leave the space for self-regulation. Financial regulations, issued in most cases by the central bank, require all banks to follow certain guidelines and restrictions. As a result, the banks have the same regulations in their own services what lowers the competitiveness between the banks. Nonetheless, under current circumstances and in the current financial system it is not impossible for the banks to self-regulate. The current system assesses the risk in a way that the taxpayers are usually the ones who have to bail out the cost in case of a failure. ...read more.

However, if we look back now, deregulation has affected the Chinese economy in a totally positive way. Much more foreign direct investment arrives into the country, and meanwhile the export industry of China got well opened up, and now it has became the largest exporter in the world. In addition, during the past three years, central banks have been trying to fix the current regulatory regime by implementing more and more ?effective? financial regulation. Yet, the result is unsatisfactory. We should realize now, that in order to help the current situation, and a new system needs to be introduced; a system which will consist of far less regulations that the country is facing now, and will effectively increase the business confidence of the economy. Conclusion Generally, the message remains the same. It is not the matter of the more the better or the less the better, but of the most suitable one for the current situation. There is absolutely no point of bureaucrats/regulators writing more and more regulations when it is not effective. Just as Prof Booth said: ?The key is a financial system where prudent behaviour runs with the grain of self-interest.?[5] Deregulation will provide more chances for the country to flourish again in the financial market. ...read more.