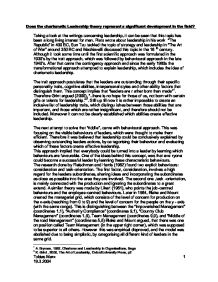 Does the charismatic Leadership theory represent a significant development in the field?

Does the charismatic Leadership theory represent a significant development in the field? Taking a look at the writings concerning leadership, it can be seen that this topic has been a long living interest for men. Plato wrote about leadership in his work "The Republic" in 400 BC, Sun Tzu tackled the topic of strategy and leadership in "The Art of War" around 350 BC and Machiavelli discussed this topic in the 16th century. Although it took some time until the first scientific approach was formulated in the 1930's by the trait approach, which was followed by behavioural approach in the late 1940's. After that came the contingency approach and since the early 1980s the transformational approach attempted to explain leadership, which includes the idea of charismatic leadership. The trait approach postulates that the leaders are outstanding through their specific personality traits, cognitive abilities, interpersonal styles and other ability factors that distinguish them. This concept implies that "leaders are rather born than made"1. Therefore Grint argued (2000), "..there is no hope for those of us, not born with certain gifts or talents for leadership."2. Still up till now it is rather impossible to create an inclusive list of leadership traits, which distinguishes between those abilities that are important, and those which are rather insignificant, and therefore should not be included. ...read more.

One example of charismatic leadership was Paul O'Neil at ALCOA, who had a clear vision compelling and central to the firm, set high expectations for his employees and continuously created vision and energy at ALCOA though meetings, task forces, video tapes and extensive personal contact. (Nadler and Thrushman 1989). In order to assess if there was a significant development in the field, through the introduction of charismatic leadership to the leadership theory the context of the area has to be explained. In the 1970's and 1980's, mainly in the US and UK, there was a new culture emerging, with the enterprises culture focusing on the customer rather than on the product. The belief was that an organisation could best serve its own profitability and long term health by providing a better service to the customer than the competing companies. There was a focus upon individualism, which was spreading throughout culture and mostly termed as "Thatcherism". The shift was away from big government and about being independent and your own person. In 1982, Thomas J. Peters and Robert H Waterman brought out a book called "In search for excellence", giving a recipe on how to be successful, by examining 43 of the most successful US companies and then writing down their common characteristics. ...read more.

Grint says that leadership "..is essential an interpretative affair, it casts doubt upon those claiming scientific legitimations for their claims and buttresses an approach to leadership that firmly within the arts not the sciences. In effect, I am suggesting here that one of the reasons that we have so much difficulty in explaining leadership and trying to enhance the leadership qualities and skills of those who are leaders, is that we have to adopt a philosophical perspective that obscures rather than illuminates the phenomenon. In other words, the more "scientific" our methods of analysis become, the less likely we are to understand leadership because it is not accessible to scientific approaches".7 Taking this statement into considerations, it is clear that the charismatic leadership approach is a significant development, since it does not try to quantify. To conclude, it is not my belief that it was a significant development in understanding the topic, although it was certainly a step in the right direction. By this I mean that it "broke down" the walls which were built by the other models and therefore facilitated us to do a "broader thinking" by introducing a new factor, and also taking the subordinates or followers into account . But since the world is not simple to understand and cannot be fully explained via looking at a few variables, there is a need for a more complex approach. ...read more.