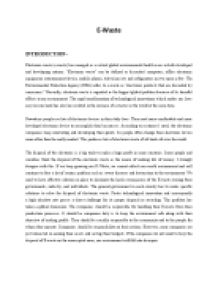 E Waste Managment. The rapid transformation of technological innovations which makes our lives easy on one hand has also has resulted in the increase of e-wastes in the world at the same time..

﻿E-Waste INTRODUCTION? Electronic-waste (e-waste) has emerged as a critical global environmental health issue in both developed and developing nations. "Electronic waste" can be defined as discarded computers, office electronic equipment, entertainment device, mobile phones, television sets and refrigerators just to name a few. The Environmental Protection Agency (EPA) refers to e-waste as "electronic products that are discarded by consumers." Presently, electronic waste is regarded as the biggest global problem because of its harmful effects to our environment. The rapid transformation of technological innovations which makes our lives easy on one hand has also has resulted in the increase of e-wastes in the world at the same time.. Nowadays people use lots of electronic devices in their daily lives. They need more comfortable and more developed electronic device to accomplish their businesses. According to customer?s need, the electronic companies keep innovating and developing their goods. So people often change their electronic device more often than the really needed. This produces lots of electronic waste of all kinds all over the world. The disposal of the electronic is a big trade to make a huge profit in some countries. Some people and countries think the disposal of the electronic waste as the means of making lots of money. I strongly disagree with this. If we keep growing our E-Waste, we cannot refresh our world environment and will continue to face a lot of serious problem such as severe diseases and destruction to the environment. We need to have effective solution in place to eliminate the harsh consequence of the E-waste coming from governments, industry, and individuals. ...read more.

Another issue is that most Recyclers don?t recycle, but instead they export the e-waste material for profit. Most recycling firms take short cut of exporting e-waste instead of recycling. From 50% to 80% of e-waste that is collected for recycling is shipped overseas for dismantling under horrific conditions, poisoning the people, land, air, and water in China, other Asian nations and to Ghana and Nigeria in western Africa. I read an article Short Life-Span of the Electronic equipment. Electronic devices have very short life and often it is more cost effective to dispose of a device and purchase a new one, rather than have it repaired. According to Greenpeace, The average lifespan of computers in developed countries has dropped from six years in 1997 to just two years in 2005. Mobile phones have a lifecycle of less than two years in developed countries. With regard to smart phones, in particular, their life span could be even less than a year. Disposal and Threats E-waste can be disposed and treated in various ways and these methods can be reason of Hazard. Land filling is very common and widely used. According to the US EPA, more than 4.6 million tones of e-waste ended up in US landfills in 2000. Toxic chemicals in electronics products can leach into the land over time or are released into the atmosphere, impacting nearby communities and the environment. In many European countries, regulations have been introduced to prevent electronic waste being dumped in landfills due to its hazardous content. ...read more.