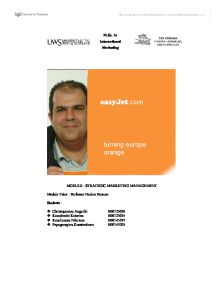 EasyJet. Within this essay there is going to be an approach on easyJets strategy and how has developed its resources, capabilities and gained its competitive advantage.

M.Sc. In International Marketing MODULE : STRATEGIC MARKETING MANAGEMENT Module Tutor : Professor Declan Bannon Students : * Christopoulou Angeliki B00123030 * Karadimitri Katerina B00123035 * Kourliouros Nikolaos B00145197 * Papageorgiou Konstantinos B00145205 Table of Contents Aims and scope 2 1. Introduction 2 2. The environment of EasyJet 3 2.1. The mission 3 2.1.1. Porter's "Five Forces" and their Application to easyJet 3 2.2. Rivalry among other airline industries 5 2.3. Marketing Mix 5 2.4. SWOT Analysis 6 2.5. PEST Analysis 7 3. Evaluating Resources and Capabilities of EasyJet 8 3.1 Distinctive Capabilities of EasyJet 9 3.2 EasyJet's Value Chain Application 10 4. EasyJet's strategies & evaluation 12 4.1 EasyJet's Stakeholder Analysis 12 4.2 EasyJet's Stakeholder Mapping 12 4.3 The Generic Strategies Matrix 13 4.4 Evaluation of Strategies 14 4.4.1 Suitability 14 4.4.2 Acceptability 15 4.4.3 Feasibility 15 4.4.4 Sustainable Competitive Advantage 15 5. The future of easyJet 16 6. Conclusion 17 7. References 18 8. Appendix 19 Table of figures Figure 1 Porter's 5 forces model 4 Figure 2 Value chain 10 Figure 3 Stakeholder mapping 12 Figure 4 Generic strategies matrix 13 Figure 5 Network strategy 17 Aims and scope Within this essay there is going to be an approach on easyJet's strategy and how has developed its resources, capabilities and gained its competitive advantage. 1. Introduction Stelios Haji-Ioannou founder of easyJet and easyroup, has introduced easyJet to the public in 1995 as a new no frills airline services. EasyJet was based on the model of SouthWest airlines, a low cost air carrier in the US. In 1995 easyJet started with two leased aircrafts and its first flight was from Luton to Glasgow with a one way fare of 29�. During flights there was no meal served nor soft drinks, everything was offered provided that it was paid and only easyJet's magazine 'easyrider' was free of charge. Stelios argued that during bus travels nothing was offered for free and did not see any reason why that should be any different in air flights. ...read more.

3. Evaluating Resources and Capabilities of EasyJet The vital resources of a company consists of its productive characteristics; whereas capabilities refer to the firm's corporate dimension and explain what a firm is capable of doing. Resources can be classified on three types: tangible, intangible and human capital. According to Grant (2007), tangible resources are "the physical assets of an organization such as plant, labor and finance". In easyJet's existing strategy, the physical assets were: * The concentration on hubs with little direct competition, such as Luton, an airport based near the city center of London. Firm's headquarters are also placed in Luton airport. * In 2007, easyJet presented a fleet expansion of 31 aircraft deliveries, in terms of Airbus arrangement (introduction of A319, easyJet Switzerland). Concerning financial criteria, easyJet: * Beginning at September 2002 with the Go acquisition, 84% of the fleet was financed through bank leases. * Long-term gearing from banks and re-finance the purchase of its equipment. * Airbus Contract will finance the airline's resources and cash flow. Apart from tangible resources, it is essential to examine intangible capabilities, which are "non-physical assets such as information, reputation and knowledge" (Grant, 2007). Technology is a key characteristic of easyJet's corporate culture, as the firm was implemented in the airline market through Internet and practically introduced online selling tickets (e-ticket), with no use of traditional paper ticket. Its reputation became global through its web site. "Human resources are the productive services that human beings offer to the firm in terms of their skills, knowledge, reasoning and decision-making abilities" (Grant, 2005). Last but not least, human resources functioned within the general innovative philosophy of the airline company: * All the employees were outsourced, technically supported by other airlines, in terms of check-in personnel and pilots. * By all means, personnel recruitment is organized through Internet. Departments' autonomy in recruiting employees. * Lack of superior class (business class) ...read more.

The company focus on cost per seat model, predicting the price of rivals and offering the lowest possible price in the market. Above all, EasyJet's renowned characteristic was the innovation through Internet that practically introduced online booking services in the airline industry. Due to the fact that safety is a top priority in passengers' mind, EasyJet ensures success as it is considered one of the most reliable airlines. This philosophy lucks in many Cost Leader airlines, giving EasyJet the benefit of a high commercial position. 5. The future of easyJet As Andy Harrison said while announcing preliminary results, by 2011 easyJet will terminate the use of Boeing when the contract lease ends and this will minimize the fleet cost complexity. EasyJet has four main categories of customers, business people, VFR and commuters, short breakers and long breakers therefore the designing of a network to suit everybody is essential to future success. EasyJet's base driven strategic network is now competing with the traditional hub network. Benefits are low cost point to point flights which have clearly over passed the traditional legacy network. Soon enough easyJet will have 19 bases with aircraft flying to 80 destinations. Figure 5 Network strategy This action will take the network on a new level join up existing bases, access new routes with different flight patterns and eliminate some of the less profitable routes. Over the years it is expected this network optimization to deliver high revenues by designing the network around customer demands and to increase aircraft utilisation. These is also going to be faster boarding using "Speedy Boarding plus" at 34 major airports enabling passengers to access to a speedy checking-in service. 6. Conclusion EasyJet is an airline company that operates with new aircrafts which have lower demands on fuel. This is crucial in a time when the oil prices are continuously raising so as the operating costs. Provided that easyJet will exploit its advantages to other airline companies could boost easyJet to one of key companies in the European airline industry disregarding the fact that it is a 'no frill' airline. 7. ...read more.