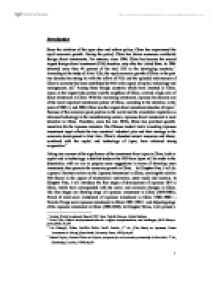 Introduction Since the initiation of the open door and reform policy, China has experienced the rapid economic growth. During the period, China has drawn numerous worldwide foreign direct investments. For instance, since 1994, China has become the second largest foreign direct investment (FDI) absorber, only after the United State. In 1996 attracted more than 40 percent of the total FDI to the developing countries.1 According to the study of Alvin Y.So, the rapid economic growth of China in the past two decades has strong tie with the inflow of FDI, and the splendid achievement of China's economy has been contributed by FDI in the aspect of capital, technology and management, etc.2 Among those foreign countries which have invested in China, Japan, as the largest trade partner and the neighbour of China, covered a high ratio of direct investment in China. With the increasing investment, Japanese has become one of the most important investment partner of China, according to the statistics, in the years of 1993-5, and 1999, China was the largest direct investment absorber of Japan.3 Because of the economic giant position in the world and the remarkable reputation as advanced technology in the manufacturing sectors, Japanese direct investment is most attractive to China. Therefore, since the late 1970s, China has provided specific incentives for the Japanese investors. The Chinese leaders' tactic in seeking Japanese investment input reflects the two countries' industrial plan and their strategy in the economic development in East Asia. China's abundant natural resources and labour, combined with the capital and technology of Japan, have achieved strong cooperation.4 Taking into account of the significance of the investment from Japan in China, both in capital and in technology, a detailed study on the DIF from Japan will be made in the dissertation, with an aim to propose some suggestions in terms of attracting more investment, thus promote the economic growth in China. ...read more.

After the general description of the four stages of Japanese DFI in China, and the reasons of change, in the following chapter, I will present my study on a specific case of Japanese DFI in China - case study on Dong-An Automotive Engine Manufacturing Co. Ltd, to discuss in depth issues concerning the Japanese DFI in China. Chapter Three: Case study of Japanese FDI in China: Dong-An Automotive Engine Manufacturing Co., Ltd 3.1 The research objectives The Dong-An Automotive Engine Manufacturing Co., Ltd is selected as the case study, and the data were collected during interviews, as well as from secondary sources of information such as annual reports, brochures and the business press. The major questions posed in considering Japanese FDI in China, are related to the benefits and objectives sought by investors, the method of market entry including issue of ownership and internalization, and the location and obstacles that may be caused by current legislation and policy. On the basis of the above this study aims to explore in depth the following issues concerning the Japanese DFI in China: 1. The motivations for entering and investing in China; 2. The modes of market entry including issue of ownership; 3. The obstacles of Japanese investment in China's automobile market. 4. The location of establishment and the underlying reasons; 5. The knowledge and technology transfer of the enterprise 3.2 The research subject The interviewees included all level employees from the manger and expert to the worker who came from two countries in the company except two presidents because of their commercial affairs, the total number of interviewees were ten which have been employed before the establishment of the company, four come from Japan and six come from China, the four Japanese interviewees all could speak in Chinese or English which made the interview convenience. Among the four Japanese interviewees, their duty were different, they were engine expert, marketing and projector manager, plant supervisor and equipment maintenance man respectively. ...read more.

But based on the study made in the dissertation - from the description of the four stages development about Japanese direct investment, we should be conscious of the drawbacks in Chinese political and economic investment environment, which have sometime impeded the further development of Japanese FDI in China. A study in depth on the Japanese FDI in China has been made, from the discussion on the data, we can see clearly the importance of Japanese investment in the development of Chinese economy, and at the same time, the shortcomings in China' policy concerning foreign investment - both politically and economically, also showed themselves clearly. Considering the importance of Japanese FDI in the economic development in China, based on my study, I would like to make the following suggestions as to how to promote the investment. First, since the motivation of investment is the most important, the government of each level should try their best to enhance the investment environment - to enhance the infrastructure of the city, to relax controls on the foreign companies, to reduce the restriction and barriers on the relative laws and regulation, to make the policy of relative authorities more transparency, etc. Secondly, more research should be made on the FDI in China, only based on which, can the government and their officials really see the importance of FDI in China's development, and can legislations more favourable be made, and can a more favourable foreign investment environment be achieved, in the true sense. In fact, since China has only opened its door to the outside world for about 20 years, there is still a long way for the Chinese government to perfect its performance in the attracting of foreign investment. However, with China's entry to WTO, with the determination of the government to attract FDI, and the consciousness of the Chinese people on the importance of the foreign investment, more investment, both in capital and in technology, will inflow into China, not only from Japan, but from other countries, thus play its utmost role in the promoting of the development of China. ...read more.