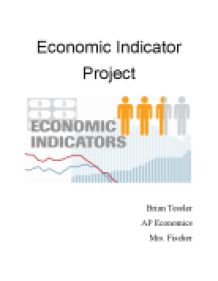 Economic Indicator Project - analysis of the US Economy and Advice to the Fed.

﻿Economic Indicator Project Brian Tessler AP Economics Mrs. Fischer 17 December 2012 The current condition of the economy can be described as stagnant recovery. Although the economy has been recovering, it is doing so at a slower pace than people had hoped and expected. These trends can be seen in many of the major economic indicators, including Consumer price index, Gross Domestic Product, industrial production, and retail sales. As a result, the U.S. economy has still not fully rebounded from the recession. Consumer price index is extremely important to the total economy because it is a measure of the change in the average price level of a fixed basket of goods and services purchased by consumers. CPI is the most widely followed monthly indicator of inflation. The CPI is considered a cost-of-living measure since it is used to adjust contracts of all types that are tied to inflation. Labor contracts are tied to changes in the CPI; Social Security payments are tied to the CPI; and even tax brackets are tied to the consumer price index. As for the current condition, consumer price inflation dropped in November on lower energy costs and the core rate softened. The consumer price index in November fell 0.3 percent, following a 0.1 percent increase the month before. ...read more.

Since they are not being sold, it is not helping the product market and is a deceiving increase in GDP. If the Federal Reserve Bank only looked at GDP, it would implement a large-scale expansionary policy in which the FOMC would buy securities and the Fed would lower discount rates and the reserve ratio. As a result, the increase in money supply and loans would lead to more consumption and investment to boost GDP. The index of industrial production is important to the total economy because it shows how much factories, mines and utilities are producing. Industrial production indicates not only trends in the manufacturing sector, but also whether resource utilization is strained enough to forebode inflation. Lastly, industrial production is an important measure of current output for the economy and helps to define turning points in the business cycle, such as a start of recession or a start of recovery. As for its current condition, industrial production rebounded in November with notable help from recovering from Hurricane Sandy and a boost in auto assemblies. Overall, industrial production rebounded 1.1 percent, following a decline of 0.7 percent in October. Although this is a positive, it is only a slight increase and does not change the fact that industrial production has been pretty much stagnant over the last 2 years. ...read more.

However, there is a risk if retail sales don?t increase like projected because business may overproduce, which would lead to a surplus of goods. This could potential flood the market with excess goods, which would drop prices and hinder price stability. If the Federal Reserve Bank was only concerned with retail sales, then the FOMC would buy more securities in order to increase the money supply. This would increase in aggregate demand, and thus also raise the demand for retail sales. Based on the current state of the economy and the results found in these indicators, the Federal Reserve?s greatest priorities must be maximizing employment and price stability. In order to ensure that inflation is at consistent level around the goal of 2%, the FOMC must continue to purchase mortgage-backed securities. Additionally, the FOMC should also purchase longer-term Treasury securities after its program to extend the average maturity of its securities is completed at the end of the year. The Fed should also roll over maturing Treasury securities at auction in order to maintain downward pressure on longer-term interest rates and support mortgage markets. Finally, the Fed should keep the federal funds rate at its current range between 0% and .25% as long as there is still high unemployment. This low rate will keep stabilized interest rates, which is needed in the current money market in order to foster economic growth. ...read more.