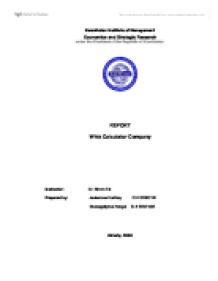 Kazakhstan Institute of Management Economics and Strategic Research under the President of the Republic of Kazakhstan REPORT Whiz Calculator Company Instructor: Dr. Simon Tai Prepared by: Jaukenova Kunikey ID # 20020165 Mussagaliyeva Nazgul ID # 20031495 Almaty, 2004 Report "Whiz Calculator Company" Introduction Whiz Calculator manufactured a complete line of electronic calculators, which is sold through branch offices to wholesalers and retailers, as well as directly to government and industrial users. Most of the products carried the Whiz brand name, which was nationally advertised. The company was one of the largest in the industry. Bernard Riesman was elected president of the Whiz Calculator Company. He had been the vice president of manufacturing for the preceding two years. The new president thought that the existing method of planning and controlling selling costs was unsatisfactory, and he requested the controller to devise a system that would provide better control over these costs. The selling expenses were budgeted on a "a fixed" or "appropriation" basis. He believed there are two important weaknesses in this method of setting the selling budget. First, it was impossible for anyone to ascertain with any feeling of certainty the reasonableness of the estimates made by the various department heads. ...read more.

By definition the budget does not purport to measure the optimum amount of spending, we cannot say that living within the budget is efficient performance. * In existing system management did not properly consider following items: - Donations - Light & Heat - Advertisement - Taxes Conclusion The management used the incremental budgeting, and after drew up the new selling expense budgeting by controller we think it neither incremental nor "Zero-Base Review" budgeting system. Recommendations The company should clear understand the engineered and discretional expenses in order to judge about efficiency and effectiveness. By the theory, efficiency the ratio of outputs to inputs, or the amount of output per unit of input. Effectiveness is determined by the relationship between a responsibility center's output and its objective. From the case we have seen the center's objectives differ from. Then they should add such item as Research and Development expense. It is investments in long run. * The management should make forecast for the next year on the previous data * Should distinguish engineered and discretional expenses more accurately * Open R & D department in order to have long run profit * Find the way of reducing the costs that will not reflect the volume of output * Open new product line in order to reduce risks 2 ...read more.