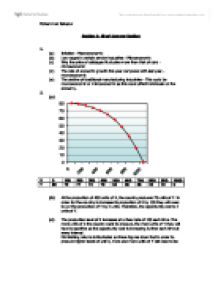 Section A: Short Answer Section 1. (a) Inflation - Macroeconomic (b) Low wages in certain service industries - Microeconomic (c) Why the price of cabbages fluctuates more than that of cars - microeconomic (d) The rate of economic growth this year compared with last year - macroeconomic (e) The decline of traditional manufacturing industries - This could be macroeconomic or microeconomic as this could affect individuals or the economy. 2. (a) X 0 100 200 300 400 500 600 700 800 900 1000 Y 80 79 77 74 70 65 58 48 35 19 0 (b) At the production of 400 units of X, the country produces 70 units of Y. In order for the country to increase its production of X by 100 they will need to cut the production of Y by 5 units. Therefore, the opportunity cost is 5 units of Y. (c) The production level of X increases at a fixed rate of 100 each time. The more units of X the country want to produce, the more units of Y they will have to sacrifice as the opportunity cost is increasing further each time at every interval. ...read more.

Price fixing is an agreement which occurs between competitors to sell the same product at the same price. The outcome of this method used by competitors is to prevent further competition or maximise profits as consumers will have no alternative choice. Price fixing in the UK is illegal. Therefore, the main 4 supermarkets in the UK can't make agreements with one another to fix prices. Other products such as commodities may have a fixed price in the supermarkets as these prices can be set by the government. The Competition commission and the Office of Fair Trading keep an eye on all the supermarkets which are competing in the oligopolistic market to ensure they are not using price fixing. Predatory pricing occurs when firms sell products at a very low price where there are very few competitors or a monopoly with the intent to drive out existing competition as they may not be able to match the prices. This method also creates a barrier of entry for new competitors as they will find it very difficult to enter the market. The information which the Office of Fair Trading gathered suggested that the UK supermarkets such as Tesco, ASDA, Sainsbury's and Morrisons used predatory pricing in order to prevent further competition and also drive out current competition. ...read more.

The competition commission want to try and make the market as perfect as possible to benefit consumers and companies by ensuring current competitors and potential competitors get an equal chance to compete in the market. However, the current big four supermarkets have taken up tactics to prevent competition by buying undeveloped land and using predatory pricing making it very difficult to compete. The competition is looking into this and supermarkets such as Tesco may be forced to sell their undeveloped land giving others an opportunity to compete. The competition commission want to try and make the market perfect if possible which will benefit more or less the whole economy. The office of Fair trading need to ensure supermarkets actions are for the best interests of the consumers. However, due to the significant buying power and size of the UK supermarkets, customers are being over priced heavily as supermarkets are paying less but keeping the prices at the same level. This is also preventing competition as the waterbed affect results in their competitors having to pay higher prices for the same produce. The OFT want to ensure the consumers are not being overpriced and have a wide variety of options, in order to achieve this goal the OFT will hope to increase competition within the UK grocery market. ...read more.