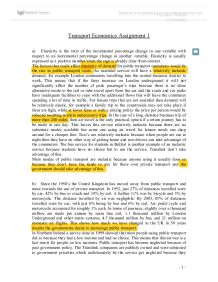 Transport Economics Assignment 1 a) Elasticity is the ratio of the incremental percentage change in one variable with respect to an incremental percentage change in another variable. Elasticity is usually expressed as a positive number when the sign is already clear from context. The factors that could affect elasticity of demand for public transport operations would be the rise in public transport costs. An essential service will have a relatively inelastic demand, for example London commuters travelling into the central business district to work. This means that if the fares increase on London underground it will not significantly affect the number of peak passenger's trips because there is no close alternative mode to the rail or tube travel apart from the car and the roads and car parks have inadequate facilities to cope with the additional flows this will leave the commuter spending a lot of time in traffic. For leisure trips that are not essential then demand will be relatively elastic, for example a family trip to the countryside may not take place if fares are high, while at lower fares or with a pricing policy the price per person would be reduced resulting in more unnecessary trips. In the case of a long distance business trip of more than 200 miles, then air travel is the only practical option if a return journey has to be made in one day. ...read more.

Public transport has become neglected because of past government policy. The Translink companies are publicly owned and were subjected to government priorities which unfortunately let the service get neglected because they had to reach profit targets. I think if bus fares were to be lowered, it might work on the short term but Translink is already restricted to limited capital and would result in the service getting worse. Transport costs are high for those people relying on public transport everyday. Car ownership would be a lot more expensive with your annual running costs like tax and mot and it's this area of people that should be sought after to use public transport. If it can be proved that people will be saving a lot of time and money by using the bus then a few might get out of there cars and use the buses. This is the group of people that are going to be attracted by a cheaper service because some of them are probably struggling to pay all of the expenses of running a car and if they can save time then that would be perceived as another way to save money. The biggest disadvantage to lowering the fares on the buses is keeping the customers happy because the people that are using the buses already complain about the comfort, heating ...read more.

I believe this method could work as a short term solution to people's lack of public transport usage but it is only going to result in the service becoming run down. This method will probably attract a few more people onto the buses but as the buses become old, uncomfortable and unreliable more people will end up back in there cars. This plan would require a lot of finance from the government and it will end up being the tax payers that have to pay for the public transport repairs. This is only going to leave the people on low incomes happy and they are already restricted to the service anyway so the congestion problems will not be improved. I my opinion the only way to get people to use public transport is to prove that using a bus will save u a lot of time than a car, and the best way to do this is to invest money in more bus lanes and set up a bus priority scheme. If people now they are saving a large amount of time then they will soon work out that this also saves them money so if the service is fast and comfortable then the customers will soon get sick of sitting in there cars in traffic. ...read more.

A lot of assumptions have been made in the above essay, and a better link between opinion and relevant references would boost the good attempt at a logical argument. The author doesn't really mention elasticity in part b), which would help here. 3 stars.