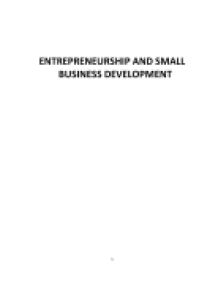 ﻿ENTREPRENEURSHIP AND SMALL BUSINESS DEVELOPMENT ________________ CONTENTS: 1. INTRODUCTION 3 2. BIOGRAPHY AND GENERAL INFORMATION 4 3. BUSINESS AND PERSONAL SURVIVAL 5 4. CHARACTERISTICS 7 ENTREPRENEURSHIP 8 INTELLIGENCE 8 VISIONARY 9 PASSION 9 INNOVATION 9 RISK TAKING 10 LEARNER 10 CRITICISM 10 HARD WORK 11 CONFIDENCE 11 LEADERSHIP AND MANAGERIAL SKILLS 12 5. CONCLUSION 13 6. REFERENCE 14 ________________ ENTREPRENURSHIP AND SMALL BUSINESS ENTERPRISE "It's fine to celebrate success but it is more important to heed the lessons of failure. Bill Gates INTRODUCTION: The entrepreneur I have chosen is legendary business figure Bill Gates. William Henry Gates III as known as Bill Gates is an American businessman, investor, author, philanthropist and last but not least an entrepreneur. Bill Gates is a CEO and a chairman of the software company "Microsoft". He is best known as an entrepreneur in personal computer area and he is one of the wealthiest people in the world. The main reason that Bill Gates has a big influence in the computer industry is because he was the inventor of Microsoft. ________________ PROFILE AND GENERAL INFORMATION William Gates was born on 28th of October, 1955. By seventh grade he had big interests in personal computers and had a dream to become professor. When Bill Gates and his school mate Paul Allen were studying in high school, Mother's Club of Lakeside School collected money to buy computer for school's students. This event has changed a life of Bill Gates. He and Allen were fascinated with programming process and were spending all of the time on the computer writing programs for various purposes. Gates and Allen stepped into the world of entrepreneurship at the age of 15. They wrote a program to regulate traffic and formed a company to spread this software. On this project with the name "Traf-O-Data" they have earned 20.000 US dollars. Gates has named his partnership "Micro-soft". In 1990 "Microsoft" released its first version of Windows. ...read more.

Bill Gates is similar to other geniuses who merge their work with inventions and self expression becomes their passion. Bill Gates has his dinner either in his workplace or in restaurants/fast food. He never actually eats at home. Bill Gates refuses to fly by first class. The desire to be the first, to do whatever it was better that the others is the quality inherent to Bill Gates from his childhood. 1. ENTREPRENEURSHIP Bill Gates is one of the most successful entrepreneurs. Since very young age Gates had ability to run successful and profitable entrepreneurship. From the beginning he had vision and dedication, which are the main skill of entrepreneur. The success of "Microsoft" is connected with his entrepreneurial skills, and he became a motivational figure for new entrepreneurs. His hard work, dedication and self-confidence helped him to reach this high point of fame, leadership and entrepreneurship. His name is known worldwide not only as computer magnate but also as successful entrepreneur. 1. INTELLIGENCE Bill Gates believes in hard work; and says if you are intelligent and know how to apply your intelligence, you can achieve anything you want. His qualities like ambitious, intelligent and competitive helped him to obtain the top level position in his profession. His parents could see his intelligence so they enrolled him to privates school because of its intense academic environment. Bill Gates IQ is 160 and scored 1590 out of 1600 on the SAT and enrolled at Harvard College. Ray Kroc, an American entrepreneur who founded McDonald's, has never finished his high school. But he made millions of dollars out of fast food chain. This story is same as Bill Gates, who dropped out from college. Ray Kroc was intelligent because he could see the opportunity to make successful business. 1. VISIONARY Bill Gates has managed to fulfill his great dream - a computer on every desk and in every home. ...read more.

"IBM" was a leading computer company. Meanwhile Intel invented microprocessors, the heart of computers, and had all resources. Bill Gates was in a right place right time and had a necessary talent. He entered the rivalry with giants and won, meanwhile "IBM" faced to compete with the boys, who they helped to enter the world of software products. Bill Gates did not have some special gift that allowed him to monopolize the industry. He was clever, intelligent, industrious and in a right time. Bill pointed out that part of it came by "accident" but always added that nothing would happen without the hard work. He had instinct, spirit of innovator, and the ability to take risks. Even he was in right place, right time, he correctly understood the need of industry. He has used the opportunities in the best way. No one in the computer industry did not make that kind of money, as Bill Gates. Bill Gates is a passionate lover of the competition, who sacrificed their personal pleasures and possibilities to achieve higher goals. Bill Gates will be known as philanthropist who has bettered lives of many people, businessman who showed that without a degree you can succeed in many things and entrepreneur in the personal computer area who had vision, passion and all the entrepreneurial skills. The media gave him a nickname "Nerd". He answered them with the words: "Be nice to nerds. Chances are you'll end up working for one." ________________ REFERENCE 1. "Forbes" Magazine. April 1991. 2. Anonymous. [Online] Available at http://en.wikipedia.org/wiki/Bill_Gates 3. Anonymous. [Online]. Available at http://www.mypersonality.info/personality-types/famous-people/ [Accessed 15 March 2012] 4. Anonymous. [Online]. Available at http://similarminds.com/jung/entj.html [Accessed 15 March 2012] 5. Beaumont C. 2008. [Online] Available at http://www.telegraph.co.uk/technology/3357701/Bill-Gatess-dream-A-computer-in-every-home.html [Accessed 12 March 2012] 6. Dickinson J. 1997. Bill Gates, billionaire computer genius. Enslow Publishers. 7. Gates Bill, 2011. https://twitter.com/#!/BillGates/statuses/126826339377479681 8. Gates Bill. [Online] Available at www.microsoft.com/billgates/bio.asp 9. Rensin, D., 1994. "The Bill Gates Interview". Playboy. 10. Schendler B. [Online] Available at http://money.cnn.com/magazines/fortune/fortune_archive/1990/06/18/73684/index.htm 11. Schendler B. 1990. " How Bill Gates keeps the magic going" The Fortune Magazine. ...read more.