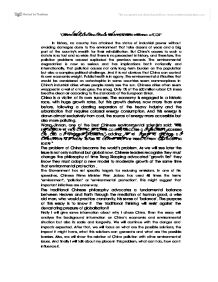 "China has produced more than 1.8 billion tonnes of CO2" In history, no country has attained the status of industrial power without avoiding damages done to the environment that take dozens of years and a big part of the country's wealth for their rehabilitation. But China's access to such a statute is so fast and so wide that there is no precedent in history, and therefore, the pollution problems caused exploded the previous records. The environmental degradation is now so serious and has implications both nationally and internationally, that pollution causes not only long-term burden on the population but also a complex political challenge. And it is not obvious that China can control its own economic weight. Public health is in agony. The environmental difficulties that would be considered as catastrophic in some countries seem commonplace in China's industrial cities where people rarely see the sun. Chinese cities often seem wrapped in a veil of a toxic grey, the smog. Only 1% of the 600 million urban Chinese breathe clean air according to the standards of the European Union. China is a victim of its own success. The economy is engaged in a historic race, with huge growth rates. But this growth derives, now more than ever before, following a dazzling expansion of the heavy industry and the urbanization that requires colossal energy consumption. And this energy is drawn almost exclusively from coal, the source of energy more accessible but also more polluting. Wang Jinnan, one of the best Chinese environmental scientists said: "The situation is very difficult for the country because our greatest successes are also our biggest problems," adding: "It is urgent to change our direction, but many refuse to admit that we need a new approach so soon. ...read more.

Also cropland losses is estimated at one fifth of agricultural land since 1949 due to soil erosion. Deforestation is accelerating, which promotes more floods and deserts, which already cover 27% of Chinese territory, growing at a rate of 2 460 km � per year. Desertification threatens to uproot a number increasingly growing of residents from their habitats and their economic resources. It also generate disappearing wetlands and grassland degradation. And there are many other consequences like depleted fisheries, the increase frequency of natural disasters, overgrazing, interrupted river flow, soil salinity, trash accumulation, shortages and of course the water pollution but we will talk about it later. The seacoast is so invaded by the red tides of algae, that a broad part of the ocean no longer allow the underwater life. The second point refers to the impact on human systems. Sulphur dioxide, nitrogen dioxide, PM10, heavy metals, the list of pollutants in the massive air, land and water in China is long. Pollution has made cancer the leading cause of death in China, according to the Chinese Minister of Health. The air pollution is the only cause of thousands of deaths each year. Children are killed or made sick by lead poisoning or other types of pollution. Almost 500 million people lack clean water. According to a report by the World Bank, entitled "Cost of Pollution in China: economic estimates of physical harm", 750 000 people die prematurely in the country. Pollution brings its own threats, one of the other big point of this issue is the pollution of water. Not only water is increasingly polluted, but it is increasingly rare. ...read more.

There are some examples : to recover the sewage or water polluted by their chemical waste in recuperation tank or artificial lakes, to reduce the active chemical dangerous for nature and to settle for the strictly necessary for the transformation of the raw material into manufactured products (dyes, chemical stabilizers in the food industry and pharmaceutical), to plant more trees in cities, to create nature areas, to renew forests worn or burned and to find a compromise between industrialisation cities and a comeback to a healthy and educational nature (Shanghai researching this new balance in its urbanisation plan and sustainable development). To sum up, it is not easy to talk about every point of this big issue. In 2007, China has become the largest producer of CO2 in the world. The global community is facing a problem of environmental impoverishment. It is no longer an issue as to whether it is happening or not but rather how to contain the possible effects. China is facing such growth that they are in front of a major challenge on the local and global environment. Pollution is causing multiple deaths and a huge burden on the economy and something must be done. The president Hu Jin Tao is aware of the pollution dangers, and new laws were introduced. Some questions might be raised. It can suppose that environment is only the concern of rich countries, indeed developed countries, having achieved their industrial revolutions, can they impose on developing countries to compel to production methods taking into account the environment? Is not for developed countries a form of protectionism that use environmental pretext? Where the context is it arrived coming to the point that it is unacceptable that a country does not react to a planetary emergency? ...read more.