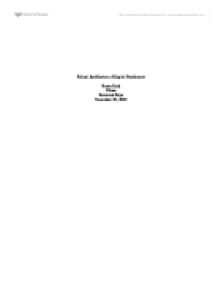 Ethical Justification of Capital Punishment Bryan Reid Ethics Reverend Boys November 20, 2002 Bryan Reid Rev. Boys Ethics November 19, 2002 "Where would Christianity be if Jesus got eight to fifteen years with time off for good behavior?" -NY State Senator James Donovan, speaking in support of capital punishment. The Ethical debate over the legalization of Capital Punishment With life comes responsibility. As people grow to be individuals in society, they must be held accountable for their decisions and actions. A conservative moral outlook favors the legalization of the death penalty over a more liberal one. Being the conservative I am, my feelings toward why people commit crimes lie more on their individual accountability rather than social causes. Believing that people are autonomous, rational, and free in their individual desires to choose for themselves, I feel that an individual should be held responsible for what they choose to do, especially if it is grossly unlawful, and face the consequences that his or her actions wield. ...read more.

Kant may have envisioned a world where society lives peacefully, respecting each other, and without conflict, but his vision is nothing more than that. In conjunction with my conservative stance on capital punishment, I am also a realist. Evil is a reality. Individual moral decline is a reality. Capital sanctions are a reality, and should remain so. Through teleological utilitaristic theory, individuals who grossly fall by the wayside of everyone else must be instrumentally used as an example for everyone else. They must serve as warnings to the rest of us. In the colonial times, hangings were made public in order for the immediate society to witness what happens when any wrongdoing occurs. Many argue with the value of capital punishment as a deterrent. The problem with capital punishment not being the deterrent it can be is that the sanction is not administered swiftly enough. For punishment to be a deterrent, it needs to be public, harsh, and swift. ...read more.

According to the National Corrections Institution, an estimated $2.3 million is spent per case to keep a man on death row. Abolitionists say, for a third of that, you could imprison someone in a single cell for forty years. Personally, I think that argument is absurd. First of all, the enormous cost of $2.3 million is spent on the countless appeals each death row inmate receives throughout their sentence. Appeals can draw out an inmates stay on death row for as long as 20 years. Another reason that argument is wrong is that once an inmate is on death row, he or she has no access to rehabilitating programs, simply because there are none. Why would you sentence a person to death and then spend taxpayer's money to fund programs designed to rehabilitate? You don't. Capital punishment has remained popular with the American public and their legislative representatives. People hesitate to endorse executions, but when met with some horrific murder in their country, they feel that the death penalty should be available. When polled in 2001, the majority of people tend to favor capital punishment 67 percent to 33 percent. ...read more.