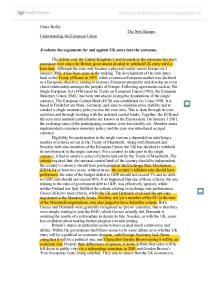 Evaluate the arguments for and against UK entry into the eurozone.

Claire Reilly The New Europe: Understanding the European Union -Evaluate the arguments for and against UK entry into the eurozone. The debate over the United Kingdom's involvement in the eurozone has been prominent ever since the British government decided to withhold UK entry until a later date. Although the euro only became a physical reality across Europe on 1 January 2002, it has been years in the making. The development of the euro dates back to the Treaty of Rome in 1957, when a common European market was declared as a European objective, aiming to increase European prosperity and develop an even closer relationship amongst the peoples of Europe. Following agreements such as The Single European Act (1986) and the Treaty on European Union (1992), the European Monetary Union, EMU, has been introduced, laying the foundations of the single currency. The European Central Bank (ECB) was established on 1 June 1998. It is based in Frankfurt am Main, Germany, and aims to maintain price stability and to conduct a single monetary policy across the euro area. This is done through its own activities and through working with the national central banks. Together, the ECB and the euro area national central banks are known as the Eurosystem. On January 1 2001, the exchange rates of the participating countries were irreversibly set. ...read more.

As usually happens when trade increases, jobs will in turn be created. The introduction of the euro will also benefit Europeans when buying goods, as a single currency promotes prices-transparency. This means that customers can readily assess the relative prices of similar products from anywhere within the union. One country can no longer devalue its currency against another member country in a bid to increase its competitiveness of its exporters. One of the changes that the public will become most aware of is that when travelling throughout Europe, they will not have to worry about the hassle of changing currency as they change countries. The reduced exchange rate uncertainty for UK businesses and lower exchange rate transactions costs for both businesses and tourists will bring an increase in economic welfare. This, say some is enough reason to join the EMU. The euro will become a force for the Dollar and the Yen, something that the individual European currencies would have found almost impossible to do. The development of the European Central Bank means that there would be a less volatile interest rate policy than had the Bank of England, or other central banks fixed it. Despite all these reasons of why joining the euro would be a good idea for the UK, it remains a public decision via referendum. However Britain stands to lose political as well as economic influence in shaping future European economic integration if it remains outside the new system. ...read more.

A big fear for British people is that currency unions have collapsed in the past. There is no guarantee that the EMU will be a success, so why risk losing the usually reliable pound? The euro may be a recipe for economic stagnation and higher structural unemployment. The prospect of losing the power to manage our own interest and exchange rates when vitally needed proves too much a risk for some people. For others the prospect of withholding from such a momentous change in European policy could be devastating for Britain and eventually mark their separation from the EU. If Britain opts-out for the time being until the single currency has had a chance to both synchronise and improve the economies of the euro zone, then it might be in a better position to offer advantages that outweigh the risks. On the other hand, if the euro fails miserably and its economies go into recession, then we will be suitably distant from it to avoid unnecessary damage to our own economy. Opinion is divided, as much in business as the unions, on the political left as well as the right. Polls suggest that the UK population is divided three-to-one against entering the European currency. Whatever its judgment of the five economic test might be, the government will have to make a sixth judgment over whether to risk a blistering public defeat on such an important and controversial issue. ...read more.

This is extremely thin on references - in that there are none! There is a bibliography but none f the sources are referenced in the essay. If there was no requirement for references, I would probably award this a low to mid 2.1. If it was a requirement, this would probably be a 2.2.

Other than that, it is a good run through of the key debates. It contains a lot of relevant information and there are few mistakes. It is organised coherently and the essay flows well. What it lacks is a critical framework - a structure to organise the 'fors' and 'againsts'. Having this spelt out in the introduction would be beneficial.