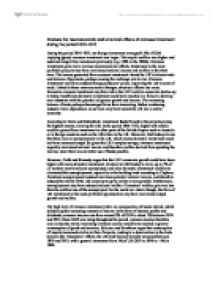 Evaluate the macroeconomic and structural effects of overseas investment during the period 1870-1913 During the period 1870-1913, net foreign investment averaged 4.3% of GDP, implying (gross) overseas investment was larger. This capital outflow was higher and sustained longer than investment previously (e.g. 2.8% in the 1860s). Overseas investment gave rise to various macroeconomic effects. Investment in the most profitable projects may have maximised national income and welfare in the short term. The income generated from overseas investment altered the UK's balance trade and balance of payments, perhaps causing the exchange rate to rise. Overseas investment may have reduced foreign producers' prices, improving the UK's terms of trade. Linked to these macroeconomic changes, structural effects also arose. Excessive overseas investment may have led to the UK's relative economic decline up to today. Insufficient domestic investment could have resulted in a failure to develop new industries with the potential of greater growth and income. The worsening balance of trade perhaps discouraged firms from innovating, further weakening industry. Over-dependence on services may have turned the UK into a rentier economy. According to Davis and Huttenback, investment funds flowed to the projects paying the highest returns, allowing for risk. In the period 1860-1912, higher safe returns could be gained from investment in other parts of the British Empire such as Australia or in foreign countries such as the USA than in the UK. ...read more.

in an increase in demand for sterling, the supply of which was effectively fixed due to the Gold Standard, so causing an appreciation in the exchange rate and a fall in competitiveness for manufacturers. However, the evidence does not fully support this theory, moreover, Matthews, Feinstein and Odling-Smee admit that the balance of payments did not necessarily strengthen due to a rise in investment income so perhaps competitiveness did not fall due to overseas investment. In reality, invisible income may have outweighed the deterioration in the trade balance due to other factors, for example a partial offsetting of the worsening trade balance by a large expansion in coal exports. In general, overseas investment will not necessarily improve the balance of payments since 'absorption' effects also due to investment worsen the trade balance. Edelstein proposes that overseas investment improved the UK's terms of trade. Edelstein claims that overseas investment reduced foreign producers' costs. For instance UK investment in railways in Argentina reduced transport costs. Therefore, the price of imports fell, resulting in the terms of trade improving by about 0.1% per year between 1870 and 1913. An improvement in the terms of trade would have enabled the UK to purchase more imports, so enabling greater utility to be gained from a larger level of consumption. ...read more.

Overseas investment was in the most profitable projects but did not maximise national income and welfare in the short term, due to persistent unemployment. Finally, overseas investment improved the UK's terms of trade. Linked to these macroeconomic changes, structural effects arose, though their relative importance is less certain. Excessive overseas investment may have led to the UK's relative economic decline up to today, through an underperformance of the economy due to unemployment, a failure to develop new high-growth industries and a discouragement of improvements in existing industry. The relative decline of industry may have reflected a growing comparative advantage in financial services, but alternatively over-dependence on services may have turned the UK into a rentier economy with an underdeveloped industrial sector. Points Possible macroeconomic effects: Balance of payments - absorption effects - rentier structure C and I propensities not important over period as a whole Inflation? - related to BoP, but not a major point - Solomou - only during Edwardian period, rest of time 'filtered out by other influences' not inflation, exchange rate!!! Social return larger than private, welfare increases (Terms of trade improved - EDELSTEIN) Also, industry not lost out because no funds, rather tariffs and education. Industrialisation overseas so greater competition with UK and less exports eventually... Possible structural effects: Britain's relative decline Lack of development of new industries (More conjecture possible this section) Rentier economy Discouraged industry (absorption) ...read more.