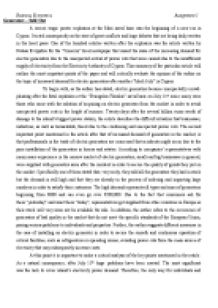 Evaluation of an article written by Natasa Evripidou for the Simerini local newspaper on the topic of electricity shortages in Cyprus and the demand for generators.

﻿Business Economics Assignment 1 Generators ? Sold Out A recent, tragic power explosion at the Mari naval base was the beginning of a new era in Cyprus. It acted consequently as the start of great conflicts and huge debates that are being daily written in the local press. One of the hundred articles written after the explosion was the article written by Natasa Evripidou for the ?Simerini? local newspaper that raised the issue of the increasing demand for electric generators due to the unexpected arrival of power cuts that were caused due to the insufficient supply of electricity from the Electricity Authority of Cyprus. This summary of the particular article will outline the most important points of the paper and will critically evaluate the opinion of the author on the topic of increased demand for electric generators after another ?black July? in Cyprus. To begin with, as the author has stated, electric generators became unexpectedly crowd-pleasing after the fatal explosion at the ?Evangelos Florakis? naval base on July 11th since many were those who came with the solution of acquiring an electric generator from the market in order to avoid unexpected power cuts in the height of summer. Twenty days after the several billion euros worth of damage to the island?s biggest power station, the article describes the difficult situation that businesses, industries, as well as households, faced due to the continuing and unexpected power cuts. ...read more.

As soon as power cuts begun to emerge, the quantity demanded for generators has increased significantly. In economic terms this event raises the quantity demanded at any given price shifting the demand curve to the right. Subsequently, a new equilibrium point is formed as both price and quantity rise and a movement along the supply curve is being observed. Power generators are considered to have an inelastic demand as it is a necessity, for the moment, but because it does not have a close substitute as well. People nowadays require electricity for almost everything, but the most important is lighting, warming houses and cooking their meal. Businesses as well require electricity to sell their goods and industries need it to produce their goods. Therefore in this case, the quantity demanded does not respond strongly to a change in price and elasticity is less than one. It can also be shown that the demand is inelastic since price and total revenue move in the same direction. At the same time, as there is a movement along the supply curve, more generators will be supplied by the sellers. The supply of electric generators depends as well on the time horizon. Similarly to demand, supply tends to be inelastic in the short run. Since elasticity of supply depends on the flexibility of sellers to alter the amount of generators they are able to sell, quantity supplied ...read more.

Specifically, a few days ago, the chairman of Parliamentary Health Committee, Costas Constantinou, stated that the government and society need to be aware of the possible consequences to the environment and public health and security and various measures need to be taken. Costs will eventually become higher due to the consequences of the well-known global warming effect and measures that meet the EU standards will need to be met. Businesses and companies need to make sure that they offer a safe environment for their employees avoiding any accidents caused by the generators. To sum up, various individuals will doubtless be made accountable for the tragedy at the Mari naval base and the Electricity Authority of Cyprus will gradually regain its full generating capacity. Electric generators may be a temporary solution to the problem, however this raises many issues. A crucial one is the unexpected increased demand that created a shortage. As a result prices of goods may increase due to the increase of costs of production and the danger of pollution from the emissions of generators introduces new problems to the islands economy. However, the damage to the economy could hardly have come at a worse moment given that the government and opposition parties have been attempting to agree on a package of measures to ensure that the island does not go the way of Greece and require an EU bailout. ...read more.