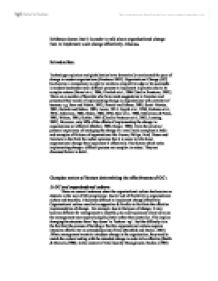 Evidence shows that it is easier to talk about organisational change than to implement such change effectively. Discuss

Evidence shows that it is easier to talk about organisational change than to implement such change effectively. Discuss. Introduction: Technology explosion and globalisation have dramatically accelerated the pace of change in modern organisations (Prastacos 2002). Organisational Change (OC) has become a compulsion in order to maintain competitive edge or be successful in modern businesses and a difficult process to implement in practice due to its complex nature (Hamel et al, 1996; Illinitich et el, 1996 Cited in Prastacos, 2002). There are a number of theorists who have made suggestions in literature and presented their model of implementing change in organisations with certainty of success. e.g. Beer and Nohria, 2002; Pascale and Athose, 1981; Scott- Morton, 1991; Bullock and Batten, 1985; Lewin, 1951; Lippitt et al, 1958; Frohman et al, 1976; Ackerman, 1982; Bruke, 1982, 1994; Beer et al, 1990; MaCalman & Paton, 1992; Walton, 1995; Kottler, 1995 (Cited in Prastacos et al, 2002; Lanning, 2001). However, only 30% of the efforts of implementing the change in organisations are effective (Strebel, 1996; Siegal, 1996). From the practical personal experience of managing the change in a small scale company in India and examples of failures of organisations like Fumac, Philips, Ford, Nissan and literature in the field, the author opinions that it is easier to talk about organisational change than implement it effectively. ...read more.

Dexter (1994) point out that the universal models of change management are inadequate to address each organisations needs according to its culture and particular situation. The management have to be extra careful in choosing the right strategy for implementing the change. It cannot afford the risk of blindly applying the standard change recipe and hope it will work (Owen, A, 1986). Turbulent times demand different approaches in varied circumstances (Dexter, 1994), so the management should be smart enough to choose a "contingency model" which will enable to change strategies to achieve "optimum fit" with the changing circumstances. Managers also need to be able to interact effectively with employees who posses different values and work orientation (Smith et al 1998). 2) Negligence of human factors: One of the main reasons for difficulty in implementing the OC is the negligence of human factors over the technical side of organisational change by the management (Siegal et al, 1996). All of the processes of OC directly or indirectly deal with or influence the employees. It implies that OC means personal change for employees (Bovey. 2001). OC requires participation of employees who have to change themselves so that organisational change can be a success (Evans, 1994). ...read more.

R., 2007). Communication has a key role to play in determining the level of resistance. A poorly managed change communication results in rumours and higher level of resistance from employees to change by exaggerating the negative aspects of change. Sometimes there is a high level of uncertainty during change about the individual implications and the outcome which affects the employee's readiness to change. When organisational change results in down sizing and employee lose their jobs; the job-insecurity of survivors will have a big negative effect on the employees' readiness to change (Elving, 2005) Conclusion: The extent of difficulties in effectively implementing the OC depends on the extent of resources' spent on planning the careful strategies for OC. However in general the nature of the process of change implementation is complex and difficult to put effectively in practice. The management have to consider all of the above mentioned complex aspects OC for a planning the strategy. It is easy to understand by analysing case studies, how and why a particular organisation failed in effectively implementing the change. Even though the number of theories produced is huge, the statistic of failure to effectively implement the change is as high as 70% (Strebel, 1996; Siegal, 1996).Thus it proves that it is easier to talk about organisational change than to implement such change effectively. ...read more.