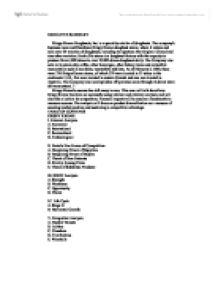 EXECUTIVE SUMMARY Krispy Kreme Doughnuts, Inc. is a specialty retailer of doughnuts. The company's business owns and franchises Krispy Kreme doughnut stores, where it makes and sells over 20 varieties of doughnuts, including its signature Hot Original Glazed and nine other varieties. Each of its stores is a doughnut factory with the capacity to produce from 4,000 dozen to over 10,000 dozen doughnuts daily. The Company also sells in its stores drip coffee, other beverages, other bakery items and collectible memorabilia such as tee shirts, sweatshirts and hats. As of February 2, 2003, there were 276 Krispy Kreme stores, of which 270 were located in 37 states in the continental U.S., five were located in eastern Canada and one was located in Australia. The Company also accomplishes off-premises sales through its direct store delivery system. 1 Krispy Kreme's success has left many in awe. This case will talk about how Krispy Kreme has been so successful using internal and external analyses and will also take a look at its competitors. Financial reports will be used as a benchmark to measure success. The analysis will focus on product diversification as a measure of securing market position and sustaining a competitive advantage. TABLE OF CONTENTS KRISPY KREME I. External Analysis A. Economic B. International C. Sociocultural D. Technological II. Porter's Five Forces of Competition A. Bargaining Power of Suppliers B. Bargaining Power of Buyers C. Threat of New Entrants D. Rivalry Among Firms E. Threat of Substitute Products III. SWOT Analysis A. Strength B. Weakness C. Opportunity D. Threat IV. Life Cycle A. Stage II B. ...read more.

It is experiencing Horizontal Growth and Vertical Integration. Krispy Kreme has an automated system, designed to create high quality, consistent doughnuts. They manufacture their own custom doughnut making equipment for all of their restaurants. Krispy Kreme chooses not to segment its market, believing that their appeal extends across all major demographic groups, including age and income. Krispy Kreme uses a Functional Structure. Krispy Kreme is not a monopoly, it is an Oligopoly. Competitor Analysis Competing in similar markets with Krispy Kreme are Dunkin' Donuts, LaMars, Cinnabon, Tim Hortons and Winchells. With this focused group of competitors, the market commonality is very high and undifferentiated with the exception of the degree to which their baked goods variety differs. Each company carries with it an emotion in the eyes of consumers. Dunkin' Donuts is known for its coffee. LaMars has a small shop feel. Tim Hortons and Cinnabon are known for their baked goods, while Krispy Kreme is known for its doughnut theater. Small pastry companies that sell their product within discount stores are also competitors. Another competitor is the small local doughnut shop. Krispy Kreme is now selling doughnuts right out of service stations. By doing this, Krispy Kreme opens up to an enormous market and also really hurts the store brands such as Hostess and Little Debbie that are giving them strong competition. In an interview, Stan Parker, the Senior Vice President of Marketing, was asked whether or not the selling of doughnuts to convenience stores and grocery stores would hurt the hot and fresh Krispy Kreme reputation. His response was that they don not initiate sales through grocery and convenience stores until they have penetrated that market with an actual Krispy Kreme store. ...read more.

Through a related diversification strategy, Krispy Kreme should choose to offer a variety of other products that doughnut eaters tend to enjoy. In 2001, Krispy Kreme acquired Digital Java, Inc. to broaden their beverage offering to customers. It also offers espresso beverages, frozen coffee beverages and frozen beverages prepared with a variety of proprietary flavors. 4 In addition to doughnuts, they sell snack foods, real fruit pies, cinnamon buns and mini-doughnuts. 5 Offering more morning sweets or health conscious breakfast items such as low fat bagels should be avenues they explore. Krispy Kreme could choose to diversify into fresh baked breads for the evenings or deli type sandwiches throughout the day. Although Krispy Kreme has done a successful job in securing their position and maintaining a competitive strategy, it is critical that they continually take strategic actions to stay ahead of the competition. Already, other companies in the doughnut industry have begun to respond to some of the successful actions by Krispy Kreme. One company has even begun to compete head to head with what Krispy Kreme prides itself on most, taste and quality. LaMar's Doughnuts has held taste tests directly competing with a variety of Krispy Kreme's products. In one such contest, held in Springfield, Missouri, police and sheriff's department officers judged LaMar's Doughnuts to be superior to Krispy Kreme's products in four of five categories; original glaze, glazed sour cream, chocolate iced and Bavarian Cr?e filled and cinnamon role. 6 Cinnabon represents themselves as a "modern version of the traditional neighborhood bakery where people are always welcome to stroll in, sample their unique product and delicious treats and linger a while to enjoy the entertaining baking process and warm, friendly atmosphere. 7 Possibly future threats will be some of the strategic actions of competitors like Dunkin' Donuts. ...read more.