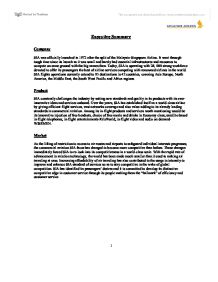 Executive Summary Company SIA was officially launched in 1972 after the split of the Malaysia-Singapore Airline. It went through tough time since its launch as it was small and barely had essential infrastructures and resources to compete on same ground with the big names then. Today, SIA is operating with 28, 000 strong workforce devoted to offer its passengers the best of airline services competing with renowned airlines in the world. SIA flights operations currently extend to 93 destinations in 42 countries, covering Asia Europe, North America, the Middle East, the South West Pacific and Africa regions. Product SIA constantly challenges the industry by setting new standards and quality in its products with its ever-innovative ideas and services onboard. Over the years, SIA has established itself as a world-class airline by giving efficient flight services, vast networks coverage and also value-adding to its already leading standards in commercial aviation. Among its in-flight products and services worth mentioning would be its innovative injection of free headsets, choice of free meals and drinks in Economy class; satellite-based in-flight telephones; in-flight entertainments-KrisWorld; in-flight video and audio on demand-WISEMEN. Market As the lifting of restriction to access to air routes and airports to safeguard individual interests progresses, the commercial aviation SIA faces has changed to become more competitive than before. These changes immediately forced SIA to re-look into its competitiveness in a world-class scale. With the rapid rate of advancement in aviation technology, the world has been made much smaller than it used to making air traveling at ease. ...read more.

The traditional business tool for doing this is a SWOT analysis (strengths, weaknesses, opportunities and threats). The strengths and weaknesses are factors internal to the organization. SIA 's key strength lies in the location of Singapore as an important crossroads of the world. Singapore is a relatively small country, which has been one of the economic success stories of the last 25 years. As with other Southeast Asian economies Singapore's success lies in the strong trading links that the country has developed in the global economy. As a former British colony that gained independence in 1965, it had to market its services globally to be successful. In its early days, the airline was much smaller than its rivals. This was a major internal weakness. SIA, as the national airline, was faced with an intensely competitive global market in which the big players like British Airways operated on many routes with large fleets of aircraft. Until recently many countries have restricted access to air routes and airports in order to protect their national airlines against foreign competition. Today all this is changing, as, along with many other areas of international trade, there is strong pressure to open up markets and allow greater competition. However, in the early years SIA had to work very hard to secure the right of access to many important countries and airports. It took many years of struggle to achieve landing rights at Heathrow, followed by Manchester. Most recently SIA is seeking access to transatlantic routes from the UK. SIA is committed to the notion of "open skies", i.e. ...read more.

Seats have been updated to provide more room and comfort. Passengers are able to enjoy World Gourmet Cuisine and even champagne. Awards Achieved By Singapore Airlines Singapore Airlines has achieved many awards for the past few years, including this year. According to the recent 'Asia-Pacific Readers' Poll 2001' conducted by the 'Business Traveller Asia-Pacific' magazine, it has won 6 awards. They are: * Best Airline * Best Asia-Pacific Airline * Best Airline First Class * Best Airline Business Class * Best Airline Economy Class * Best Frequent-Flyer Programme Conclusion SIA provides an excellent example of continuous improvement in the face of extensive global competition. Staying ahead of the field means that a company can never afford to stand still. SIA is always seeking to improve the service it provides to customers and how it is constantly striving to improve customer service. SIA has been able to successfully differentiate its product by continually providing the benefits to meet the needs of the modern air traveler be it a child, an adult, a tourist, a business traveler, a film star or a Prime Minister. By constantly improving the quality of products and services, and by hiring the world's best designers and chefs, SIA is able to create the synergistic benefits that stem from working with the best employees in the world. While passengers are invariably delighted with SIA, they can be sure that SIA is working harder to make their next flight a better one. Reference: www.singaporeair.com www.geocities.com./WallStreet/2428/sia.html www.thetimes100.co.uk www.ce.berkeley.edu/ http://profiles.wisi.com/profiles/Singapore.htm www.icon.co.za/~fjcm/eot.htm Reference books: 1. The essence of Total quality management, 2nd Edition, written by John Bank 2. Total quality management- the route to improving performance, Asia 2nd Edition, written by John S. Oakland 1 ...read more.