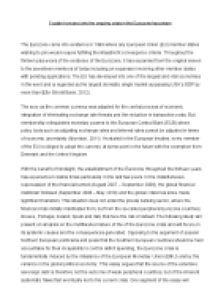 ﻿Explain how and why the ongoing crisis in the Eurozone has arisen The Eurozone came into existence in 1999 where any European Union (EU) member states wishing to join would require fulfilling the Maastricht convergence criteria. Throughout the thirteen plus years of the existence of the Eurozone, it has expanded from the original eleven to the seventeen members of today including an expansion involving other member states with pending applications. The EU has developed into one of the largest and vital economies in the word and is regarded as the largest domestic single market surpassing USA?s GDP by more than $2tn (World Bank, 2012). The euro as the common currency was adapted for the central process of economic integration of eliminating exchange rate threats and the reduction in transaction costs. But membership relinquishes monetary powers to the European Central Bank (ECB) where policy tools such as adjusting exchange rates and interest rates cannot be adjusted in times of economic uncertainty (Morrison, 2011). As stated in the European treaties, every member of the EU is obliged to adopt the currency at some point in the future with the exemption from Denmark and the United Kingdom. With the benefit of hindsight, the establishment of the Eurozone throughout the thirteen years has experienced volatile times particularly in the last few years. ...read more.

This lead to a group of countries with diverging growth potentials as the fiscal discipline was non-existent whereas the monetary discipline was. This is where the ?? changes in a relative competitiveness are reflected in the dynamics of current account deficits? (Lacina and Rusek, 2012). Thus the imbalance between sovereign nations would need to be leveled out by an adjustment mechanism and would succeed the original method of currency devaluation in deficit economies against the currency in surplus economies. Due to the relinquished monetary powers of Eurozone members, exchange rates are fixed and competition is automatically fixed as a result. On that account, the following set criteria need to be met to adjust imbalances and become more economically integrated (Mundell, 1961). Putting this into context to the EU, according to the ?Optimum Currency Areas? theory as developed by Mundell, in order for the euro to become optimal, the Eurozone must be highly economically integrated in that there must be free and substantial movement in goods, and services, capital and labour. The currency union needs to have labour mobility across the continent, as labour from the countries in deficit cannot be prevented to enter countries with more successful industries. This itself prevents the problem of skill shortages in surplus economies and unemployment in deficit economies. ...read more.

Summarising the criteria of Mundell?s notion of an Optimal Currency Union, the EMU has failed to meet any of the points. The Eurozone has low labour mobility rates, insufficient fiscal transfers, no true wage flexibility due to the wage moderation of Germany, inflation policies that benefit surplus countries, it is hard to see the why the irrational decision to include the adoption of the single currency in the Maastricht Treaty. As the German growth is from a rise in exports and domestic consumption, it has resulted in other Eurozone countries to run a deficit and remain uncompetitive. The peripheral countries have one common problem in their respective economies and that is the lack of competitiveness in exports and high import rates from other countries, which increases and worsens the trade deficits. Since the policy tool to devalue exchange rates as the respective Eurozone member can no longer implement what was the normal adjustment mechanism, and as the optimum currency area criteria has not been acknowledged and put into effect, the EMU carries notable systemic flaws that lead to the Eurozone crisis. Germany plays a significant role in the crisis and as a country that contributes the most to the ESM and Eurozone GDP they have a major influence politically on reforms and have intensified the severity of the crisis. The German politicians and press have failed to identify the systemic failures of the EMU and has therefore criticised the peripheral countries for their incapability to manage their own deficits. ...read more.