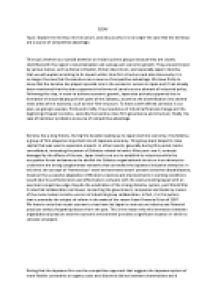 Explain the Keiretsu inter-structure, and discuss why it is no longer the case that the keiretsus are a source of competitive advantage.

In its strategy of inter-firm, General Motors hasn?t cultivated a steady network of supplier firms. To a certain extent, its correlation with supplier firm is more market-based and the relationship between General Motors and its suppliers may not sure and variable based on the price suppliers offer to it and other factors. On the one hand, Toyota tried to build long-term relationships with its supplier companies by actively facilitating knowledge sharing, transferring management practices such as operations management, transferring its personnel to suppliers. As a consequence, Toyota's network ties with its suppliers are further than transaction levels. On the other hand, it doesn?t without difficulty change its suppliers even if other suppliers offer lower prices to it. Instead, Toyota encourages its suppliers to lower their production costs by providing consulting services, information about cost reduction technologies, and so on. As the case of Toyota, many Japanese companies within keiretsu networks made investment for establishing prosperous network ties. Thus, letting members go into economic failure means that they are losing valuable ties that are developed by important investment. This may be one of the reasons that member firms try to rescue troubled firms within networks. The third way put in evidence cultural factors. Some scholars argue that Japanese firms emerge to have been successful at generating valuable network ties in part because of a country-specific institutional environment that fosters goodwill trust and cooperation (Dyer & Singh, 1998). ...read more.