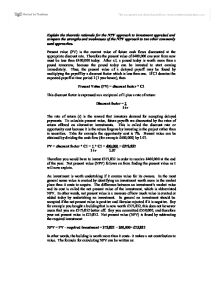 Explain the theoretic rationale for the NPV approach to investment appraisal and compare the strengths and weaknesses of the NPV approach to two other commonly used approaches. Present value (PV) is the current value of future cash flows discounted at the appropriate discount rate. Therefore the present value of �400,000 one year from now must be less than �400,000 today. After all, a pound today is worth more than a pound tomorrow, because the pound today can be invested to start earning immediately. Thus, the present value of a delayed payoff may be found by multiplying the payoff by a discount factor which is less than one. If C1 denotes the expected payoff at time period 1 (1 year hence), then Present Value (PV) = discount factor * C1 This discount factor is expressed as a reciprocal of 1 plus a rate of return: Discount factor = 1 1+r The rate of return (r) is the reward that investors demand for accepting delayed payments. To calculate present value, future payoffs are discounted by the rates of return offered on alternative investments. This is called the discount rate or opportunity cost because it is the return forgone by investing in the project rather than in securities. ...read more.

However, the biggest problem associated with the payback rule is the fact of coming up with the right cut-off point. When a cut-off point is arbitrarily chosen say for example two years, cash flows after the second year are ignored entirely even though the cash flows could increase rapidly after the second year. By ignoring time value as the payback rule does, we may be lead to take investments that are actually worth less than they cost. After all, �100 received today is worth more than �100 received in a year's time because of the time value of money. Also by ignoring cash flows beyond some subjective cut off point, we may be led to reject profitable long term investments Generally, using the payback rule will tend to bias us towards shorter-term investments and may ultimately lead to a short termist attitude from decision makers. However, the payback rule does have its advantages over the NPV rule. The main reason for this is the fact that many decisions don't warrant detailed analysis because the cost of the analysis would exceed the possible loss from a mistake. Usually if an investment pays back rapidly and has benefits extending beyond the cut off period then it is likely the investment will have a positive NPV. ...read more.

The reason is that accounting information will almost always be available, both for the project under consideration and for the firm as a whole. However, even though once the accounting information has been made available it can always be converted to cash flows, so this is not a particularly convincing advantage. It is however easy to calculate but the advantages of the rule are far outweighed by the disadvantages and the ARR rule in the main is far inferior to the NPV rule. In conclusion, the net present value of an investment is one of the most important concepts in finance. It is important to keep in mind that the NPV is always just the difference between the market value of an asset or project and its cost and the financial manager acts in the shareholders' best interests by identifying and taking positive NPV projects. Finally NPVs can't normally be observed in the market and hence they must be estimated. Because there is the possibility of a poor estimate financial managers will use other approaches for examining projects to provide additional information about whether or not a project truly has a positive NPV. The payback and ARR are just two of these rules each with there own advantages and disadvantages. ...read more.