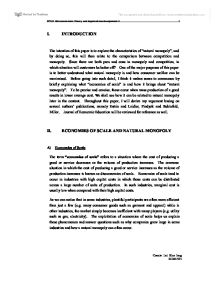 Explore the characteristics of &quot;natural monopoly&quot;, and by doing so, relate it to the comparison between competition and monopoly.

I. INTRODUCTION The intention of this paper is to explore the characteristics of "natural monopoly", and by doing so, this will then relate to the comparison between competition and monopoly. Since there are both pros and cons in monopoly and competition, in which situation will customers be better off? One of the major purposes of this paper is to better understand what natural monopoly is and how consumer welfare can be maximised. Before going into such detail, I think it makes sense to commence by briefly explaining what "economies of scale" is and how it brings about "natural monopoly". To be precise and concise, these occur when mass production of a good results in lower average cost. We shall see how it can be related to natural monopoly later in the content. Throughout this paper, I will derive my argument basing on several authors' publications, namely Estrin and Laidler, Pindyck and Rubinfeld, Miller. Journal of Economic Education will be reviewed for reference as well. II. ECONOMIES OF SCALE AND NATURAL MONOPOLY A) Economies of Scale The term "economies of scale" refers to a situation where the cost of producing a good or service decreases as the volume of production increases. The converse situation in which the cost of producing a good or service increases as the volume of production increases is known as diseconomies of scale. Economies of scale tend to occur in industries with high capital costs in which those costs can be distributed across a large number of units of production. ...read more.

Third, monopolies may be created through laws and government regulations. Sometimes the government may make it illegal for firms other than the existing one to enter into a market or it may require the firms to obtain some certificates or license in order to do so. However, obtaining this approval is often very difficult, thus deterring others from entering the market. One case is the legal protection for patents. The purpose of this is to provide incentives for innovation. B) Comparison of Perfect Competition and Monopoly As we can see from the previous diagrams that monopoly price is higher than marginal cost, this creates a dead-weight loss. (Recall that under perfect competition, price equals marginal cost). Figure 2.3 (a) illustrates the consumer and producer surplus that is received in a perfectly competitive market. Figure 2.3 (b) illustrates the loss in consumer and producer surplus that results when a perfectly competitive industry is replaced by a monopoly. The area that is between the supply curve and the price line measures producer surplus (orange shade). The area between the price line and the demand curve measures consumer surplus (yellow shade). Now, Figure 2.3 (b) shows us what happens when perfect competition is replaced by monopoly. The introduction of a monopoly firm causes the price to rise from P(pc) to P(m) while the quantity of output falls from Q(pc) to Q(m). The higher price and reduced quantity in the monopoly industry causes consumer surplus to shrink to ACP(m) ...read more.

It plays a role in balancing consumer welfare with cost-effective production in a monopoly. We have seen that government could either set P=MC but subsidise the firm in the long run to keep it in the industry or set P=AC so that it main zero economic profit. Both ways seem reasonable but subsidising firms may represent higher burden on the taxpayers who are in fact the consumers, therefore I think that the second way is more justified and fair in terms of maximising consumer welfare. Although this paper set out quite some justifications on the size of the deadweight loss, I have to admit that, as previously mentioned, the ignorance of the fact that marginal cost curves under perfect competition and monopoly may not be the same and that other elements may affect the size of the deadweight loss such as the effectiveness of barriers to entry and government intervention to simplify the model. However, I think the main purpose of comparing perfect competition and monopoly in general and explaining consumer welfare in both cases can somehow be achieved. VI. REFERENCE 1. ESTRIN, S., LAIDER, D., (1995), Introduction to Microeconomics, 4th Edition, New Jersey: Prentice-Hall, Inc. 2. LEIBENSTEIN, H., (1980), Inflation, Income Distribution and X-efficiency Theory, Barnes & Noble Books-Imports 3. MILLER, R.L., (2000), Economics Today, 10th Edition, New York: Addison-Wesley Publishing Company Inc. 4. PINDYCK, R.S., RUBINFELD, D.L., (2001) Microeconomics, 5th Edition, New Jersey: Prentice-Hall, Inc. ?? ?? ?? ?? EP101 Microeconomic Theory and Applications Assignment 2 1 Connie Loi Kim Ieng IND01535 ...read more.