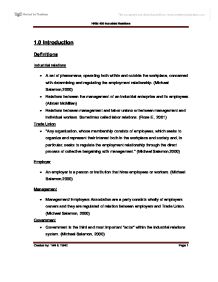 1.0 Introduction Definitions Industrial relations * A set of phenomena, operating both within and outside the workplace, concerned with determining and regulating the employment relationship. (Michael Salamon,2000) * Relations between the management of an industrial enterprise and its employees. (Alistair McMillan) * Relations between management and labor unions or between management and individual workers. Sometimes called labor relations. (Rose E., 2001) Trade Union * "Any organization, whose membership consists of employees, which seeks to organize and represent their interest both in the workplace and society and, in particular, seeks to regulate the employment relationship through the direct process of collective bargaining with management." (Michael Salamon,2000) Employer * An employer is a person or institution that hires employees or workers. (Michael Salamon,2000) Management * Management/ Employers Association are a party consists wholly of employers owners and they are regulated of relation between employers and Trade Union. (Michael Salamon, 2000) Government * Government is the third and most important "actor" within the industrial relations system. (Michael Salamon, 2000) 2.0 Discussion 2.1 External environment factors in Industrial Relations In industry, the external environment factors will influence the company's policies, strategies and management style. Policies typically described as a deliberate plan of action to guide decisions and achieve rational outcome(s). (Wikipedia, 2009) Strategy is a whole range of organization activities that help managers to organize or manage the internal and external environment. ...read more.

By the way, Bank Negara Malaysia has opened its doors to help facilitate discussions between banks and borrowers. (Mini Budget, 11 March 2009) Greater engagement between banks and borrowers is needed. Banks need to actively communicate with their current and potential customers to gauge their loan repayment abilities. By the way, looser condition for the loan application would reduce cost of doing business and attract businesses to invest. For the impact on this, they will follow accommodation and institutionalization strategies since public sector are required to give fully support to the SMEs, by the way, they need to conduct an agreement to ensure viable companies have access to funds from the banks. This is important for the survival of many SMEs in the country. Social A person's social environment includes their living and working conditions, income level, educational background and the communities they are part of. (Health-EU, 2009) Malaysia government committed to eradicating hard core poverty by 2010. Thus, government works hard to build capacity for future growth and reduce the burden of citizen in public and private sector. a) Improve access to private education * Public-private partnership Here the government to assist implementation of projects through the public private partnerships. (Bernama, 2009) By this policy, an effective area for public-private partnership is education. Therefore, the impact on the public and private sector policy is their policy will be more flexible and open to assist this plan. ...read more.

External environment such as political, economic, social and technology has been impact the relationship between employer and employee in public and private sector within Malaysia. By the way, organization culture has been created a big impact too. In addition, government policies within mini budget would impact the strategies and the management styles of the public and private sector. In my opinion, for political, the government plans to double the levy of foreign workers under the package may backfire as it will raise the cost of doing business. The employers in manufacturing and services sectors were not consulted before the double levy was announced. As such, employers are now faced with additional hardships due to both the economic slowdown and now, with the sudden policy change by the government. For suggestion, government has to re-examine the double levy policy, and to hold a dialogue with the relevant industry players on the policy. While for economic, with government guaranteed loans for businesses worth RM25 billion, or 41 per cent of the package, it will buffer downside risks to corporate earnings and help industries struggling with debts. For my suggestion, there would have been greater impact if the package included measures to raise disposable income for lower and medium-income groups. For example, the government should give direct cash assistance to the people or tax cuts to boost domestic consumption, as was done in Japan, Singapore or Taiwan. (Words count: 2379) 4. ...read more.