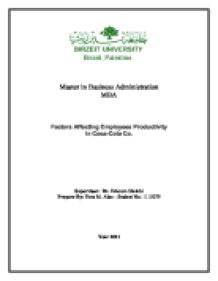 Master in Business Administration MBA Factors Affecting Employees Productivity In Coca-Cola Co. Supervisor: Dr. Fahoum Shalabi Prepare By: Firas M. Absa - Student No: 1115079 Year 2011 Table of Contents Part One: Research Problem 1. Introduction 2. Data Gathering 3. Problem Definition 4. Theoretical framework 5. Hypotheses Part Two: Research Design 6. Methodology 7. Population and Sample 8. The Goodness of Measure 9. Data Collection Method Part Three: Research Findings 10. Statistical Analysis 11. Conclusion and Recommendation 12. References 13. Appendix 1 4 9 10 13 14 16 18 19 20 31 33 34 Part One: Research Problem 1. Introduction 1.1 Preface Businesses live and die by productivity. A productive company has lower operating costs and can sell its products or services at lower prices, bringing increased volume and profits. Employee productivity is a key to organizational success and to a country's economy. Employee productivity may be hard to measure, but it has a direct bearing on a company's profits. An employer fills his staff with productivity in mind and can get a handle on a worker's capabilities during the initial job interview. However, there are several factors on the job that help maximize what an employee does on the job. While employee compensation affects productivity, some factors may boost output without costing the company anything 1.2 Research Problem The general manager of Coca-Cola Company has noticed a move back in number of produced units during the last six months, so he proposed to make a study about the factors that may affect employees' productivity and how to enhance their capabilities to increase production volume. 2. Data Gathering 2.1 Collecting Primary Data After I have been asked by the general manager to investigate in this problem, I started to collect general and basic information about the company. The information was obtained through conducting a small meeting with the general manager, reading the company policies and procedure manuals, asking informal questions to a sample of employees at several levels especially whom involved directly in production. ...read more.

If the feedback is taken properly and required changes provide according to the need of productivity. In this project it will be discussed to find the effectiveness of this factor in employee's performance in any organization. Role of supervision or management is also a very important role in getting the success of profitability of the organization. This have a critical role as the decision making and implementation of the useful decision is the major part of the supervision and management. 3. Problem Definition 3.1 Problem Definition As a result of reviewing all the previous literature done by different researchers, it is obvious that everyone highlighted and concentrated on specific variables to see (what exactly causes and affects employee productivity). From my point of view, I have noticed six variables being more important than the other variables that are mentioned and reported in most of the studies. The six variables are employee's satisfaction, training, education level, sex, age, and technology availability. These variables may be good reasons that enable the studying of the productivity problem in the Coca Cola Company. 3.2 Problem statement Here and at this point, I am now able to define this problem of the company employee's productivity. The problem statement can be: "To what extent do employee's satisfaction, training, education level, sex, age, technology availability affect the employee productivity? " 4. Theoretical Framework 4.1 Variables Framework In order to realize the variables that are seemed to be important to this problem, these variables should be mentioned. a. The Dependent Variable In this case, there is one dependent variable which is Company Productivity .This is the variable that we is being investigated although this research. b. The Independent Variables After conducting the literature review, it is recognized that many variables are affecting productivity, but due to the increased accuracy and reduced cost, this research will concentrate on six independent variables. (1) The first variable is employee's satisfaction, (2) ...read more.