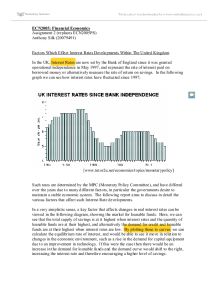 Factors Which Effect Interest Rate Developments Within The United Kingdom

ECN2005: Financial Economics Assignment 2 (replaces ECN2005PS) Anthony Silk (20079491) Factors Which Effect Interest Rates Developments Within The United Kingdom In the UK, Interest Rates are now set by the Bank of England since it was granted operational independence in May 1997, and represent the rate of interest paid on borrowed money or alternatively measure the rate of return on savings. In the following graph we can see how interest rates have fluctuated since 1997; [www.tutor2u.net/economics/topics/monetarypolicy] Such rates are determined by the MPC (Monetary Policy Committee), and have differed over the years due to many different factors, in particular the governments desire to maintain a stable economic system. The following report aims to discuss in detail the various factors that affect such Interest Rate developments. In a very simplistic sense, a key factor that affects changes in real interest rates can be viewed in the following diagram, showing the market for loanable funds. Here, we can see that the total supply of savings is at it highest when interest rates and the quantity of loanable funds are at their highest, and alternatively the demand for credit and loanable funds are at their highest when interest rates are low. ...read more.

If the Bank of England see the UK housing market as being too weak or too strong they can take the necessary action to create stability. For example; The cut in interest rates from 7.5% in Oct 1998 to 5% in June 1999 was said to be a major factor in the acceleration in housing market activity during the summer of 1999. Equally, the series of increases from 5% in June 1999 to 6% by Feb 2000 helped take some of the extra demand for housing out of the market and contributed to a slow- down in the rate of house price inflation during summer 2000. [www.tutor2u.net/economics] As well as effecting house prices and the demand for house buying, changes in interest rates, and the related changes in mortgage rates also has the effect of changing the effective disposal income of mortgage payers. For example, if interest rates fall, the disposable income of home owners who have variable mortgages will increase, and they will therefore have more money to spend. This can be shown in the following diagram, were high interest rates are accompanied by low consumer spending and vice-versa; [www.tutor2u.net/economics/content/topics/consumption] Here, we can see a distinct relationship between mortgage interest rates and consumption, and can therefore understand one way in which the Bank of England can gain the required rate of inflation by adjusting such rates. ...read more.

In conclusion, it must therefore be said that there are many factors that effect interest rate developments within the UK, but most tend to concern themselves with the Bank of England and Governments attempt to achieve the desired rate of inflation and therefore maintain a stable economic environment. When deciding on interest rate increases or decreases the Bank of England need to first of all establish whether inflation is getting out of control and whether there is cause to alter interest rates in response. Within this analysis, they will need to decide whether they are happy with elements such as the strength of the housing market, the level of consumer spending, the level of debt and/or savings, the level of corporate growth and also the strength of the British pound. It must however be remembered that although it is the stability of the UK economy that most directly effects interest rate developments, there are inevitable time lags involved and it is the general assumption that it takes approximately a year for interest rate changes to feed through to the economy and a further year for their impact to become relevant in price levels. Because of this, the Bank of England needs to base their decisions partly on their estimations of the state of the UK economy at a certain point in the future and not necessarily now. ...read more.

A very good attempt at explaining the factors that influence the base interest rate. However, diagrams and statistics would help give supporting evidence, with better layouts for quotes and graphs. Also, the difference between 'affect' and 'effect' should be learnt. Furthermore, the distinction between base rate and interest rate should be made clearer, in order to make the standard of essay even better.