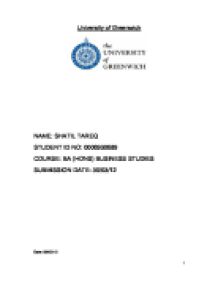 Faslane case study. The HM Naval Base Clyde (Faslane) submarine base transitioned from being under the direct control of the MOD (Ministry of Defence) to a private company called Babcock International. With these substantial transitions, it was necessary

University of Greenwich NAME: SHATIL TAREQ STUDENT ID NO: 0006930689 COURSE: BA (HONS) BUSINESS STUDIES SUBMISSION DATE: 30/03/12 Date: 09/03/12 Case Study Introduction: The HM Naval Base Clyde (Faslane) submarine base transitioned from being under the direct control of the MOD (Ministry of Defence) to a private company called Babcock International. With these substantial transitions, it was necessary for Babcock to perform change management in order to smooth over the transition, as well as improve performance, which was lacklustre enough to demand the change in leadership. Both supervisors employed different change styles and levers of change in their revamping of the operations of Faslane, to rousing success. 1) In relation to sections 14.2.1 and 14.5, the types of changes that are being pursued at Faslane are adaption change, incremental change, and transformational change. Adaption change is a change that can be accommodated within the current culture and occur incrementally. It is the most common form of change in organisations, Incremental change is a process that adds new functionality and new properties to software. It's an essential part of software processes such as maintenance, evolution, iterative development and enhancements, and agile development. Because of that, it plays an important role in practical software engineering, and by transformational change, we mean a change that is not merely an extension or improvement over the past, but a state change. ...read more.

> Cost as by the year 2000 the MOD (Ministry of Defence) had decided they needed to significantly reduce the cost and improve operational effectiveness of their naval bases and that in-house. For example, in the case study we could see that there was cost cutting changes where if a public sector manager who`s got wide ranging responsibilities and a fairly large budget has no incentive to reduce costs. They don`t share in any benefits and were brought up in a system where, if they hadn`t spent their budget, next year it would be cut. So the people at the public sector saw that a big opportunity might come from changing the mindset: to see their job as to deliver with the minimum possible spend. > Challenging the taken for granted, for example, in the case study we could see that the focus was from the waterfront inward rather than looking outwards to the ships and submarines. John thought that was because the people who looked after the site were often civilians who had been here much longer than the Navy people who looked after the ships and submarines and generally moved on after 2-3 years. So the challenge was to become focused on delivering services to the customer, the Navy. ...read more.

The conflict of interest between MOD and Faslane that has been affected has been successful as by forcing their people they were able to achieve their goals. Challenging the taken for granted where John was able to keep focus on delivering good services to the customers who were the Navy and for that reason he was successful as he was able to deliver the proper services to the customer, the Navy. Customer requirement where the customers wanted better service, have a better attitude, have a good communication, and have a responsiveness better, so that is why they were successful as Faslane gave the customers better service, created a better attitude towards the people, communicated well with the customers, and also they gave a good response by seeing the Faslane. Conclusion Both John Howie and Craig Lockhart utilized uniquely collaborative and consultative change styles in the change management of Faslane. By facilitating communication plans and other levers of change (accountability, relationships), open communication and transparency was encouraged, thereby allowing the best ideas from workers on all levels to be heard. Hearing the workers' demands, Lockhart and Howie managed to make changes that improved service, collaboration with customers, and faith in the company. Given the opportunities that Faslane has been offered in the next few years, it is safe to say that these efforts were a rousing success. ...read more.