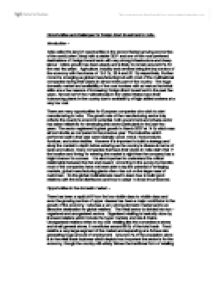 Opportunities and challenges for foreign direct investment in India. Introduction - India called the land of opportunities is the second fastest growing economies of the world (after China) with a stable GDP and one of the most preferred destinations of foreign investments with very strong infrastructure and cheap labour. India's growth has been steady and is likely to remain around 9 % for the next few years. Agriculture, industry and services being the key sectors of the economy with the shares of 18.5 %, 26.4 and 55.1% respectively. Further more it is emerging as global manufacturing hub with most of the multinational companies having their plants in almost every part of the country. The huge domestic market and availability of low cost workers with advanced technical skills are a few reasons of increasing foreign direct investment in the past few years. Almost half of the multinationals in the United States have their outsourcing plants in the country due to availability of high skilled workers at a very low cost. There are many opportunities for European companies who wish to start manufacturing in India. The growth rate of the manufacturing sector truly reflects the country's economic potential, both government and private sector has taken initiatives for developing this sector particularly in the past few years. The sector registered highest growth in March 2007 at 14 % which was almost double as compared to the previous year. ...read more.

Opportunities in the telecom sector - India telecom market is the fastest growing sector in the world and it is the third largest telecom market with 281.62 million connections as of January 2008. The success of Nokia in India which holds 58 % of the market share for mobile phones and its way ahead of its competitors such as Samsung, Motorola and Ericsson is the biggest example of how important the role of foreign investment is in this sector. The FDI inflow from April 2000 to December 2007 has been US 3.62 billion $ which accounts for around 8 % of the total foreign investment. The country has opted the use of both the GSM and CDMA technologies in the sector. The GSM subscribers are 172.23 Million as of December 2007 with the growth rate of 11.87 %. The Giant Nokia says "India is now its second market overtaking US with over 85 Million people using their phones ". In 2006 the company started its tenth Special Economic Zone in India with an investment of 300 Million $ which would employ more than 10000 people in the unit. It also had an advantage of cheap and talented labour which leads to huge profit margins for the company. But to maintain the market share it was important to meet the growing demands of the market although importing so many units was a challenge considering the country's infrastructure. ...read more.

Apart from that the fears of recession in the US has lead to weakening of the dollar and appreciation in the rupee by 10.9 % in the past few months which is largely effecting the business of off shoring companies. 2. Cost cutting by vendors - Cost cutting will be necessary for both small and large vendors in 2008 considering the current economic scenario. The major impact will be on the wages and the recruitment which will slow down until the mid of this year. Apart from that the companies will also cut down cost on marketing , administration and transportation , their main focus will be on quality of growth which will matter a lot in the long run. 3. Diversified client base - The share of the US based business in 2006 - 2007 was around 67 % which is expected to slow down as the companies are targeting other potential markets such as Middle East and Europe. This will reduce the risk and dependency on the US market, further more the vendors also have the skills and managerial capability to run their businesses at global locations. 4. Opportunities in the smaller cities - A good infrastructure and education has been the major attraction for the companies planning to setup a new unit in these three tier cities such as Udaipur, Bhopal, and Chandigarh etc. The companies can save a lot of money on operating costs and also use the talent in these small emerging cities. ...read more.