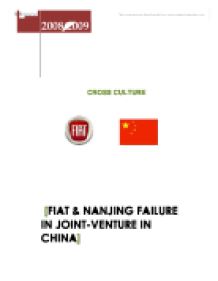 2008/2009 [FIAT & NANJING FAILURE IN JOINT-VENTURE IN CHINA] CROSS CULTURE CONTENTS Introduction 3 Differences of culture 4 Differences of management 8 Problems: why the joint-venture failed 10 Solutions and conclusion 13 References 14 Introduction: FIAT is an Italian automobile manufacturer. It is the acronym of Fabbrica Italiana Automobili Torino which means Italian Motor Factory of Turin. This company is controlled by Agnelli family and has been created in 1899. FIAT S.p.A. group controls the brands Fiat auto, Fiat Professional, Alfa Romeo, Lancia, et Maserati, IVECO, Ferrari and Irisbus. But since 2000, FIAT faces some changes in particular in 2004 with the death of Umberto Agnelli and in 2003 it suffered an operating loss of 979 billion Euros and more than one trillion in 2004. This year was the worst in the century of existence of the company. The situation rights itself in 2005 since its breakdown with General Motors 2004. Moreover, FIAT becomes successful thanks to the creation of two new models: Panda II and Grande Punto. This permitted a positive benefit and first dividends for five years. In 2007, the market shares of FIAT group were increasing in particular in the automobile sector with 32% in Italy, and 9% in Europe. In 1995, FIAT tried to break into the Chinese market which is very important. Indeed it is the first host country of foreign investments, so China is an inescapable market. FIAT made an attempt to introduce there with a joint-venture with a local firm: NANJING. ...read more.

Available at: http://site.ebrary.com/lib/anglia/Top?channelName=anglia&cpage=1&docID=10026331&f00=text&frm=smp.x&hitsPerPage=20&layout=document&p00=passport+italy&sortBy=score&sortOrder=desc. Last accessed 05 December 2008. Susan C. Scheider and Jean-Louis Barsoux (2nd edition 2003). Managing Across Cultures. Essex: Prentice Hall. 94, 71, 73, 68, 70. Last accessed 06 December 2008. Differences of management Now that we have seen the differences in these two cultures, we could lean on the consequences in a company and the effects on the way of working. The dissimilarities between the two kinds of management may explain the reasons of the failure in the joint-venture. For the management, we can use again the Hall's theory. Within the framework of work, the Chinese worker is more compliant and will express less than an Italian one. Moreover, Chinese people would work in group whereas Italian people would prefer to have a task to do alone. Let us focus on the both kinds of organisation: FIAT and NANJING. In FIAT, the staff would prefer to work in their own with special objectives in mind. The only concern is to reach these goals without changing the habits. Whereas in NANJING, they like better being concerned in the work and to keep them up-to-date of what's happening in the company. They prefer the benefit of the team than their own comfort with the routine. The workers of the two companies respect also the superior, but the hierarchy is felt more strongly in the Chinese business. As FIAT and NANJING are from and succeed in two different countries, maybe they had to match to the culture of the country in which they settled down. ...read more.

To build a good joint-venture over a good basis the most crucial is to trust each other (this is the guanxi). Thus, the two companies could communicate easily and talk about possible problems in the aim to resolve them. A good environment for the employees is important. They need to feel in a stable context and they want to be rewarded for their work. It is a factor of motivation consequently the staff will be more enthusiastic. About the organisation, they don't to choose the good structure (FIAT or NANJING) but just to find the structure of the joint-venture so the FIAT-NANJING structure. As they both are high context society, they should divide the power and take the decision together. Any company must get upper hand. I would conclude by saying that a joint-venture is not easy. The main problem was that the two companies were thinking only about their own interests and have never considered themselves as a real association. This is due to the high context. They forgot the interest of the entry in the Chinese market for FIAT. Besides Chinese culture is very different, the best would be to respect the rules like the guanxi which is very important in business. So to resume, in the beginning they both were optimistic but after few months, frustration replaced optimism. A good business cannot be build over frustration. This advice is valid whatever company which decided to break into another country. Susan C. Scheider and Jean-Louis Barsoux (2nd edition 2003). Managing Across Cultures. Essex: Prentice Hall. 236. Last accessed 06 December 2008. Liu Xia, 2007, Fiat faces an uncertain future. http://auto.sina.com.cn/news/2007-07-07/1024290458. ...read more.