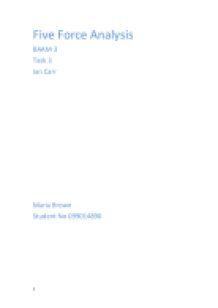 ﻿Five Force Analysis BAAM 3 Task 3 Ian Carr Maria Brown Student No 099014890 ________________ Contents Page Introduction Page 3 SWOT Analysis Page 4 Porters Five Forces Model Page 5 - 8 Competitive Rivalry Page 9 -10 Development of Technology Page 11 Restrictions of this Model Page 12 Conclusion Page 13 References Page 14 Appendices Page 15 Introduction This report intends to understand through strategic management the competitive position of the business, by looking at the five force analysis model. More Than, part of the RSA Group, have been established for over ten years. In August 2010, the organisation implemented a new Motor Aggregator Product known as echoice. The key objective was to deliver a motor product, specifically targeted and priced for the aggregator market. echoice offers core coverage at competitive prices, with a range of add-on services promoted throughout the product lifecycle. This product was developed to enable RSA to improve profitability in a highly price-sensitive channel. This e-self service product was introduced to avoid increase in operation costs and to improve customer service and expediency. This product is still a relatively new proposition to the market. This was a product that the organisation had to be aware of how the competitors would react, but also customer feedback was also something that had to be considered moving to a self service product. ...read more.

Compared to five percent using a traditional broker. The customers both competitors are attracting can be found in Appendix 2 It states on investopia (2012) that ?During this period of rapid growth, companies will eventually begin to lower prices in response to competitive pressures and the decline of costs of production, which is often referred to as economies of scale. But costs decrease at a higher rate than prices, so companies entrenched in growth industries often experience growth in profits as their product or service becomes fully accepted in the marketplace.? http://www.investopedia.com/articles/basics/04/030504.asp Competitive Rivalry Lynch (2000) states that it is difficult to differentiate products or services, than competition is essentially price based and it is difficult to ensure customer loyalty. echoice was initially branded from RSA on its launch in 2009 but then late 2011 changed to More Than, this was to relate to the More Than branding a well known direct insurer and to enhance the Brand Strategy to be more appealing and competitive on the aggregator market. A key initiative within More Than is to drive Brilliant Service and to be set aside from other insurers not just as being competitive but also for the service the customer receive. It is reported on the Investopia website (2012) that ?The insurance industry is becoming highly competitive. ...read more.

This is shown for example on the enormous growth of the e-commerce sector. Although this tool is a useful early step in analysing the environment, it is initially static, where as the competitive environment in practice is constantly changing, forces can vary more rapidly than the model can show. Conclusion Using the five force model can help a useful early step to help a business become more effective. It is especially useful to look at competitors when customers have a change of habit and need to have something new in the market for example web/direct insurance. Competitive Rivalry is good for customers as it means there is always a battle to keep costs low. Porter?s analysis proceeds on the basis that, once such analysis has been undertaken, then the organisation can formulate a strategy to handle results: predictive rather than emergent. (Lynch, R 2000) Barriers to entry are unique characteristics that define the industry; they reduce the rate of entry to new firms, maintaining a level of profit for those already in the industry. In the Insurance industry you just have to view adverts on the TV. Other insurers offer unique advantages to take insurance out with them. Although echoice and More Than have updated their internal systems they are unaware what competitors have as their next barrier to entry. Therefore this is a continuous process the organisation needs to do looking at new initiatives of how they can continue to grow the business at the right cost and differentiate themselves from others. ...read more.