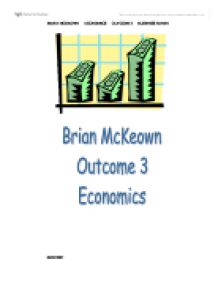 For the UK, and Scotland in particular, foreign investment has become an essential source of production, employment and income in both manufacturing and service sectors.

QUESTION 1 For the UK, and Scotland in particular, foreign investment has become an essential source of production, employment and income in both manufacturing and service sectors. It is no exaggeration that for some regions, inward investment flows have been significant in reversing relative economic decline and contributing renewed hope for increasing employment and living standards in depressed areas. It has created new employment and protected "at risk" jobs. Many of the new jobs have been full-time, offering above average levels of pay. The third benefit focuses on the supply-side of the regional economy. There is evidence that foreign investment boosts average productivity - especially when new plants are capital-intensive, using the latest technology and effective management techniques and labour practices. Also, factors such as this one above affect whom the voting public vote for in general elections. ...read more.

In particular, Scottish utilities have played a major role in helping to attract inward investment to Scotland. There is no doubt that the quality of infrastructure on offer to foreign companies is a major factor in deciding whether or not to locate in Scotland. This has played a function in attracting major inward investors such as Chunghwa and the expansion of other operations in Scotland. Another factor that will affect the placement of big companies would be the promise of huge pools of workers that are available to employ and they will be offered land to invest in this country. QUESTION 3 The establishment of foreign companies will have both positive and negative effects on local businesses and the local people. Some of the advantages of foreign investment on local businesses are with more employees in factories and more flying visits by top ...read more.

In some occasions the wages can be sky high. The town may be a competitive investment location with an adaptable, well educated and highly motivated workforce that will boost the qualifications of many townsfolk. The jobs that are provided may well prove to be secure for at least 4 years with training available should anyone require it. The disadvantages of this, however, are that as these companies may leave the country if there is a downturn in profits, the local people will have no jobs and will have to leave the area to find more employment. The people would also have learned a lot of new skills and these may well be put to bad use in a non-qualified job or boring job. It would be a waste of valuable resources to local companies who like your qualifications but will be unable to hire you. BRIAN MCKEOWN ECONOMICS OUTCOME 3 BUSINESS ADMIN 06/05/2007 ...read more.