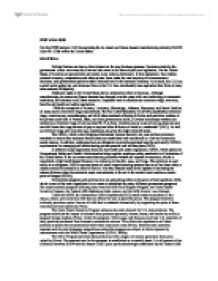 For this PEST analysis I will be analyzing the ice cream and frozen dessert manufacturing industry (NAICS Code #311520) within the United States. POLITICAL

PEST ANALYSIS For this PEST analysis I will be analyzing the ice cream and frozen dessert manufacturing industry (NAICS Code #311520) within the United States. POLITICAL Political factors can have a direct impact on the way business operates. Decisions made by the government affect our every day lives and can come in the form of policy or legislation. For the United States of America our government and nation is ran under a democracy. In this capitalistic, free market-oriented economy, corporations and other private firms make the vast majority of microeconomic decisions, and governments prefer to take a minimal role in the domestic economy. As a result, the U.S. has a small social safety net, and business firms in the U.S. face considerably less regulation than firms in many other nations (Wikipedia). Employee rights in the United States have a substantial effect on business. Although manufacturing ice cream and frozen desserts has changed over the years with new technology in automatic machinery, the industry is still labor intensive. Employee laws to consider are minimum wage, over time, benefits and health and safety regulations. "With the exception of Arizona, Louisiana, Mississippi, Alabama, Tennessee, and South Carolina all states have a minimum wage requirements. The Fair Labor Standards Act (FLSA) establishes minimum wage, overtime pay, recordkeeping, and child labor standards affecting full-time and part-time workers in the private sector and in Federal, State, and local governments (DOL). Covered nonexempt workers are entitled to a minimum wage of not less than $5.15 an hour. Overtime pay at a rate of not less than one and one-half times their regular rates of pay is required after 40 hours of work in a workweek" (DOL). As well as minimum wage and over-time pay, employees are given the right to benefit plans. The ERISA, which is the Employee Retirement Income Security Act, sets uniform minimum standards to ensure that employee benefit plans are established and maintained in a fair and financially sound manner. ...read more.

Managerial know how also might be a barrier to entry. Such know-how as distribution tactics, marketing tactics, and production tactics are all skills that could potentially give huge cost advantages to the more experienced company. There is a considerable amount of knowledge needed to understanding the day to day basis of interactions with suppliers and customers, being innovative and creative, and how to manufacture high quality ice cream at a low price. THREAT OF RIVALY "Four major manufacturers hold 40% of the market: Unilever, Ice Cream Partners USA, Dreyers Ice Cream and Blue Bell Creameries. Market leader Unilever has some of the top brands in this market, including Good Humor-Breyers and Ben & Jerry's, but faces strong competition from second-ranked Dreyers, which acquired the Nestle USA line of ice cream products in June 2003 (Findarticles). Private label accounted for nearly 18% of sales, as supermarkets and mass merchandisers caught on to the value of ice cream sales. The remaining 40% of sales are from regional and local companies (Findarticles). Medium rivalry is strong due to a number of factors. Ben & Jerry's and Haagen-Dazs dominate the global super-premium ice cream market. Each of these competitors has approximately 42% of the market, with the remaining 15% being divided up between a number of smaller firms that compete on either a local or national basis (Findarticles). Overall, the threat of rivalry exists. On the national stage, it is lower because it is dominated by just four companies, but on the regional stage it is much higher. Supermarkets, mass merchandisers, local and regional companies account for 58 percent of sales in the ice cream industry. This leaves a huge opportunity for companies to develop their own brand of ice cream and put it on the shelf. Industry growth boomed between 1998 and 2003, growing nearly 25 percent. However, this growth rate is expected to slow down and grow almost 7 percent through 2008 (Findarticles). ...read more.

Ben and Jerry's network is mixed with a variety of buyers from nation wide retailers to local grocery stores. The diversification of sellers allows them to exploit their product across the country, and even the world which enables the final consumer easy access to their product. Easy access to their product is what helps them sell ice cream, and is what helps Ben and Jerry's be one of the best selling super premium ice creams in the market. This resource is of important value, it is rare, and it is costly to imitate and therefore is a sustainable competitive advantage. Another important resource is their Ben and Jerry's Scoop Shops. This is of great value to the firm and it provides sufficient distribution, visibility and availability to the end consumer. There are not too many grocery stores or supermarkets that sell only one brand of ice cream and only a number of top competitors own or franchise scoop shop stores of their own product. A huge part of the buying demographic, ages 18-24, would prefer to buy ice cream at scoop shops, which contributes to huge percentage of sales for the entire ice cream industry. Their franchised scoop shops are very important to the firm, they are rare, and they are costly to imitate. Therefore the Ben and Jerry's Scoop Shops are a sustained competitive advantage to the firm. Although the ice cream and frozen dessert industry has become very competitive with regional store brands, local brands, and the big nation wide brands, I still believe that Ben and Jerry's has a temporary competitive advantage. The company does a wonderful job in exploiting their resources and using their strengths to compete in this industry. They have done a great job in developing brand awareness and use their manufacturing as a resource to produce some of the best quality ice cream in the United States. Their franchised scoop shops combined with their diversified number of buyers has allowed them to reach every corner of the market and provide ample opportunity for the end consumer to purchase their ice cream. ...read more.