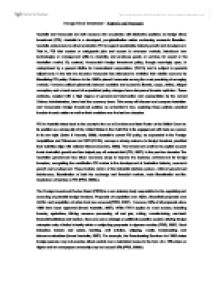 Australia and Venezuela are both resource rich ex-colonies with distinctive positions on foreign direct investment (FDI). Australia is a developed, pro-globalisation nation embracing economic liberalism. Australia endeavours to attract productive FDI to support sustainable industry growth and development. That is, FDI that creates or safeguards jobs and access to overseas markets, introduces new technologies or management skills to Australia, and produces goods or services for export or the Australian market. By contrast, Venezuela's foreign investment policy, though seemingly open, is underpinned by a general dislike for transnational corporations (TNC's) and is subject to sporadic adjustments. In the last two decades Venezuela has attempted to revitalise their volatile economy by liberalising FDI policy. Reforms in the 1990's placed Venezuela among the most promising of emerging markets. However political upheavals between socialists and economic liberals, coups, strikes, alleged corruption, and a track record of unpredicted policy changes have dampened investor optimism. These setbacks, coupled with a high degree of government intervention and expropriation by the current Ch�vez Administration, have held the economy down. This essay will discuss and compare Australian and Venezuelan foreign investment policies as embodied in law, exploring these policies practical function in each nation as well as their evolution over the last two decades. FDI in Australia dates back to the country's time as a Dominion and later Realm of the British Crown to its position as a strong ally of the United States in the Cold War to its engagement with Asia as a power in its own right. (Islam & Hossain, 2006). Australia's current FDI policy, as expounded in the Foreign Acquisitions and Takeovers Act 1975 (FATA), conveys a strong welcome to foreign investors, provided their activities align with national interest (Comlaw, 2005). The investment credit to the capital account funds Australia's growth and has helped pay off external debt (FDI, 2007). In the past two decades The Australian government has taken numerous steps to improve the business environment for foreign investors, recognising the contribution FDI makes to the development of Australian industry, economic growth and employment. ...read more.

We have not fallen into the tech-wreck trap, putting all our eggs into the high-tech market". In contrast, Venezuela has most of her eggs in the oil basket and is vulnerable to the rises and falls of global oil prices. During booms Ch�vez funnels much of the profit into immediate needs of healthcare, housing, and education for the poor. At the same time, far too little investment is put into long-term economic growth, leaving the economy stifled despite the country's enormous potential. An example of one such regime is price controls on the food and agriculture sector since 2003 in order to feed the poor. Some prices are set so low that companies are obliged to sell at a loss. If they don't, they risk fines, temporary closure, expropriation or even imprisonment. In March 2007 the government temporarily closed 17 butchers' shops it accused of breaking price regulations. Australia, with its transparent, simple bureaucratic procedures and strong economy is an easier nation to penetrate. Venezuelan administration and legal barriers are more complex as a result of inconsistent politics, adjustments to the constitution, the increasing the powers of the presidency, additions and rewrites of laws, risk of corruption and unpredictability. The Australian FIRB acts as an easy one-stop-shop for potential investors. Venezuela offers no such service. This lack of facilitation deters investors even more than Venezuelan hostility. Australia maintains a thorough anti-corruption policy and supports the OECD anti-bribery convention 1996. Venezuela has a significant problem in this area despite their own anti-corruption regulations. In January 2007 a National Assembly investigation began into 700 cases of alleged corruption and embezzlement, including accusations against the bank-deposit protection fund and a state agricultural development fund. Unsolicited expropriation of oil fields from TNC's via armed military have been common in Venezuela. In Australia expropriation is in accordance with international law and appropriate compensation is paid. The countries do share some similarities. ...read more.