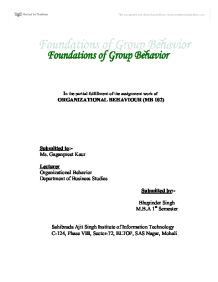 In the partial fulfillment of the assignment work of ORGANIZATIONAL BEHAVIOUR (MB 102) Submitted to:- Ms. Gaganpreet Kaur Lecturer Organizational Behavior Department of Business Studies Submitted by:- Bhupinder Singh M.B.A 1st Semester Sahibzada Ajit Singh Institute of Information Technology C-124, Phase VIII, Sector-72, ELTOP, SAS Nagar, Mohali INDEX S.No TOPIC PAGE NO. 1. Introduction 1 2. Meaning 1 3. Group Formation 2 4. Types of Groups 3 5. Stages of Group Development 7 6. Why do people join Groups? 10 7. The Structure of Group Interaction 11 8. Group Decision Making 16 9. Group Decision Making Techniques 17 10. Teams 20 11. Styles among Team Members 22 12. Characteristics of Successful 23 Groups and Teams 13. Team Composition 25 14. Team Development 26 15. Conclusions 27 -1- Introduction This assignment is about work groups in organizations-groups such as the pit crews at stock-car races, the Zebra teams that reenergized the black and white photo processing unit at Eastman Kodak, a football team, an engineering work group, or a group of nurses working the night shift at a local hospital. Groups and communication in groups are the building blocks of organizations and of social life. When people get together and talk in groups, things can happen. The challenge of group dynamics, therefore, is learning how to manage the energy of groups, whether in the kitchen, office, or manufacturing plant. This assignment explores the nature of individual behaviour in groups and teams, including the structuring, development, and improvement of group and team interaction. A model of communication is also presented, which highlights the importance of effective communication to successful group and team functioning. Meaning A group can be defined in terms of perceptions, motivation, organization, interdependencies, and interactions. A group is defined as two or more individuals, interacting and interdependent, who have come together to achieve particular objectives. According to Marvin Shaw, "A group is two or more persons who interact with one another such that each person influences and is influenced by each other ...read more.

Job descriptions are very useful because they decrease an individual's uncertainty about what to do to fulfill the group's needs and expectations. Many groups (especially informal ones) do not have job descriptions. Roles instead evolve or are negotiated informally as the group develops. Some role assignments evolve during group development as particular strengths and talents of group members are revealed. Most groups have at least two leadership roles: a task leader (who focuses on getting the group's goals accomplished) and a socioemotional (relations-oriented) leader (who focuses on maintaining harmony and good working relationships within the group). Whereas task leadership is often decided formally, socioemotional leadership emerges as the group develops and matures. Roles are specific to particular positions within particular groups. The role an individual occupies in one group may be completely different from the role that same individual occupies in other groups. Because all of us simultaneously occupy different roles, role conflict is always a potential problem. Role conflict occurs when the behaviors dictated by one role conflict with the behaviors dictated by another. -14- An important component of most roles is status. Status refers to the position of a role in a social hierarchy and is a source of power for a role holder. The amount of status that a role commands is the amount of personal worth, respect, prestige and deference that the role provides any individual occupying that role. High-status individuals can influence the behaviors of a group because of their revered positions. Similarly, members of the group view high-status individuals as opinion leaders. The power the high-status individuals exert over low-status group members is sensible when status reflects ability or expertise. Interestingly, undeserved status may be no less powerful than earned status. In courtroom trials, jurors from high-status occupations disproportionately influence final jury decisions, even though the high status occupation may make the individual no more capable than others of rendering a just verdict. ...read more.

Successful group development therefore does more than just solve interaction problems. It also creates a system for identifying and resolving future problems. Conclusions: We've covered a lot of territory in this assignment. Since we essentially organized our discussion around the group behavior model, let's use this model to summarize our findings regarding performance and satisfaction. Performance: Any prediction about a group's performance must begin by recognizing that work groups are part of a larger organization and that factors such as the organization's strategy, authority structure, selection procedures, and reward system can provide a favorable and unfavorable climate for the group to operate within. Managers shouldn't look at any group in isolation. Rather, they should -28- begin by assessing the degree of support external conditions provide the group. A group is more likely to be productive when its members have the requisite skills to do the group's tasks and the personality characteristics that facilitate working well together. The primary contingency variable moderating the relationship between group processes and performance is the group's task. The more complex and interdependent the tasks, the more that inefficient processes will lead to reduced group performance. Satisfaction: As with the role perception-performance relationship, high congruence between a boss and employee, as to the perception of the employee's job, shows a significant association with high employee satisfaction. Similarly, role conflict is associated with job-induced tension and job dissatisfaction. Most people prefer to communicate with others at their own status level or a higher one rather then with those below them. As a result, we should expect satisfaction to be greater among employees whose job minimizes interaction with individuals who are lower in status than themselves. The group size-satisfaction relationship is what one would intuitively expect: Larger groups are associated with lower satisfaction. As size increases, opportunities for participation and social interaction decrease, as does the ability of members to identify with the group's accomplishments. At the same time, having more members also prompts dissension, conflict and the formation of sub-groups, which all act to make the group a less pleasant entity of which to be a part. ...read more.