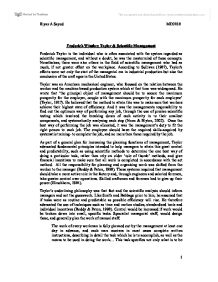 Frederick Winslow Taylor & Scientific Management Frederick Taylor is the individual who is often associated with the system regarded as scientific management, and without a doubt, he was the mastermind of these concepts. Nonetheless, there were also others in the field of scientific management who had as much, if not greater effect on the workplace. According to Sullivan (1987), Taylor's efforts were not only the start of the managerial era in industrial production but also the conclusion of the craft ages in the United States. Taylor was an American mechanical engineer, who focused on the relation between the worker and the machine based production system which at that time was widespread. He wrote that 'the principal object of management should be to secure the maximum prosperity for the employer, couple with the maximum prosperity for each employee' (Taylor, 1917). He believed that the method to attain this was to make sure that workers achieve their highest state of efficiency. And it was the managements responsibility to find out the optimum way of performing any job, through the use of precise scientific testing which involved the breaking down of each activity in to their smallest components, and systematically analysing each step (Noon & Blyton, 2002). Once the best way of performing the job was allocated, it was the management's duty to fit the right person to each job. The employee should have the required skills-acquired by systematic training- to complete the job, and no more then those required by the job. As part of a general plan for increasing the planning functions of management, Taylor advocated fundamental principles intended to help managers to attain this great control and predictability, such as using scientific methods to determine the ...read more.

Scientific management was also applied in other countries with similar criticisms and hostile reactions (Mullins, 2002). The ideas of scientific management were also adopted in the American Watertown Arsenal- to be followed more or less instantly by a strike of moulding workers. The strikes led to an investigation of Taylor's methods by a House of Representatives Committee which reported in 1912. The conclusion of the committee was that scientific management has some positive techniques and offered helpful organisation suggestions, however it gave production managers a dangerously high level of controlled power. A the same time a survey between the workers showed a broad level of hatred and hostility, by both union and non-union members, to scientific manager methods. Due to this report Taylor's methods of time study were banned in defence establishment by the committee (Mullins, 2002). Taylor assumed that financial incentives were the only way to gain the efforts required, with hardly any other stands in the link between the two. He believed that money was the key to motivation, and that employees would be ready to trail the standard tasks and routine operations if the financial reward was worthwhile (Bennett, 1991). He recommended using an individual piece work system to establish pay. If a worker achieved the set production target, management would pay the regular salary. If workers produced more, managers would pay more. However Mayo argues that money is not the key to motivation. Mayo and his team conducted a number of tests at the Hawthorn plant, the group observed some employees of the factory. The workers in this area were paid according to a piece-rate system. ...read more.

The nature of people does influence what they do at work as much as the formal design on the work environment. This implied that management would have to pay closer attention to the human side of the organising. Employees would work more effectively if management showed some interest in their well-being through more humane supervisory practice. Conclusion In the present day Examples of the Taylorism approach are easy to find, not just in manufacturing, but also in several offices and service organisations. A lot of call-centre staff, dealing with customer inquires or orders, work on a precisely specified duty. They have little discretion in how they complete the job, since management expects them to follow the prescribed method. If one is to look at staff in a bank or a travel agency the likelihood are that they would following extremely closely a set of prompts on the company computer screen, keying in the answer, which then prompts the next question (Gibrial, 1988). This assignment implies that Tailors efforts took place in a moment in time when there were a lot of industrial changes occurring after the Civil War. His approach is sill found in some organisations in the present day for example McDonald's, who generally employee young college students and people with little qualifications. But it seems that employees today, and in the near future are, and will be more educated then they were only a few decades ago. And if organisations want to stay active in the increasingly competitive global market, they will have to recognize the benefits of a motivated, efficient, co-operative and productive workforce. Hence although organisations can survive in the short run, but for the long-run management should consider looking at a different approach. Riyaz A Sayed MD2018 1 ...read more.