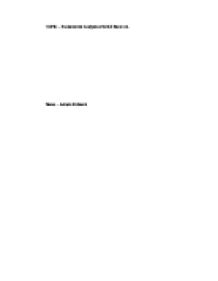 TOPIC - Fundamental Analysis of ICICI Bank Ltd. Name - Ashwin Kulkarni Sr. No. Title Page No. 1. EXECUTIVE SUMMARY 6 2. COMPANY PROFILE 7 3. OBJECTIVES OF THE STUDY 16 4. METHODOLOGY OF STUDY 17 5. ECONOMY ANALYSIS 18 6. INDUSTRY ANALYSIS 21 7. PROFILE OF ICICI BANK 30 8. DATA ANLYSIS 36 9. LIMITATIONS/CONCLUSIONS 51 10. BIBLIOGRAPHY 53 INTRODUCTION The stock market is the most volatile market and is difficult to understand as the weather. Though this does not mean that the markets cannot be predicted but it only means that trends may change without warning, as with weather. The stock markets are characterized by almost all factors, again starting right from weather and ending at the political environment. Effects of one market also causes a spillover into the other and an external cause in one market can lead to the reaction in another market. For instance, it's been proved that a delayed monsoon in India will create the problems of flooding in the European countries, effecting adversely economies of both the regions. The pulse of the market also depends upon timely exit and entry. For arriving at a correct conclusion reasonable data is required to understand the mechanics of the stock and the industry - vis-�-vis global and local in which the company operates. While a practical long-term view will help reduce risks, marrying the stock on the other hand may totally increase risks. By going through the Industry Reports, Financials the investor can arm himself with reasonable information about the stocks, which are being tracked by the investor. However, for consistent monitoring of stocks, it is imperative that the investor has limited exposure to the stocks, which are being capable of being tracked by him - a too big a portfolio will divert attention and ultimately harm investor interests. In the present project an attempt is made to study the importance of fundamental analysis for investors. ...read more.

Irrational Market Behaviour: The market itself presents a major obstacle while making analysis on account of neglect or prejudice, undervaluation may persist for extended periods; likewise, overvaluations arising from unsatisfied optimism and misplaced enthusiasm may endure for unreasonable lengths of time. CONCLUSION Fundamental analysis holds that no investment decision should be without processing and analyzing all relevant information. It strength lies in the fact the information analyzed is real as opposed to hunches or assumptions. On the other hand, while fundamental analysis deals with tangible fact, it does not tend to ignore the fact that human beings do not always act rationally. Market prices do sometimes deviate from fundamentals. Prices rise or fall due to insider trading, speculation, rumor, and a host of other factors. This is true to an extent but strength of fundamental analysis is that an investment decision is arrived at after analyzing information and making logical assumptions and deductions. Furthermore, fundamental analysis ensures that one does not recklessly buy or sell shares- especially buy. Fundamental analysis can be valuable, but it should be approached with caution. If you are reading research written by a sell-side analyst, it is important to be familiar with the analyst behind the report. We all have personal biases, and every analyst has some sort of bias. There is nothing wrong with this, and the research can still be of great value. The analysis carried out at Anand Rathi Securities Limited on the ICICI Bank, their profit and loss account, balance sheet and ratios. I shall suggest the investors to invest in ICICI Bank than the other banks as a value investment. Reasons: > Largest private sector bank in India, second largest in entire banking industry. > Strong increase in profit year-on-year basis. > Increasing EPS indicate good earnings. > Increase in sharing profit with shareholders in form of dividend. > ICICI Bank is expanding its footholds on international level also; its insurance and asset management business are also performing well. > The bank also expanding their business in rural area. ...read more.