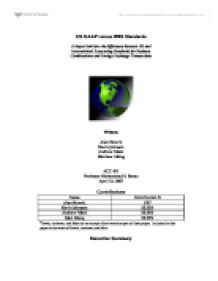 US GAAP versus IFRS Standards A deeper look into the differences between US and International Accounting Standards for Business Combinations and Foreign Exchange Transactions Writers: Alan Howitt Kevin Johnson Andrew Meek Matthew Mong ACC 401 Professor Mohammad S. Bazaz April 12, 2007 Contributions Name Contribution % Alan Howitt 0%* Kevin Johnson 33.33% Andrew Meek 33.33% Matt Mong 33.33% *Kevin, Andrew, and Matt do not accept Alan's work as part of their paper. Included in this paper is the work of Kevin, Andrew, and Matt. Executive Summary During the past few years the topic of converging accounting standards in the United States has become increasingly relevant given the greater level of globalization in modern day business. For the purpose of this paper, we will be focusing on the comparison of US Generally Accepted Accounting Principles (GAAP) and International Financial Reporting Standards (IFRS) that pertain specifically to business combinations and consolidations. The major points of interest will include business combinations and consolidations, goodwill, minority interest, and foreign currency transactions and translation. We will discuss when a business is required to prepare consolidated financial statements under GAAP and IFRS and the reporting requirements for an investment in another company to be considered a subsidiary. Some potential differences are the date when a company recognizes a business combination, how to treat research and development costs, and two different methods of accounting for business combinations and why one of these methods has recently been disallowed among international and US accounting standards. Goodwill is an area in which the International Accounting Standards Board (IASB) and the Financial Accounting Standards Board (FASB) have worked hard to try and standardize the reporting rules in order to make it easier to account for goodwill. In the past few years the IASB has created IFRS 3 and IAS 36, which made an attempt to align with SFAS 141 and SFAS 142. Some of the important issues affecting goodwill that have not been agreed upon include methods of testing for impairment and accounting for negative goodwill. ...read more.

Additionally, retained earnings are "reduced by the difference between the impairment loss and any associated reduction in the deferred tax liability" (Van Greuning 2005 186). Consequently, the debt equity ratio will increase due to this declining asset base. Also, since the asset base is declining, there will be decreased future depreciation expensed, which aids in generating future profitability, and with increased profits and lower asset values, one can expect an increase to future returns on assets (Van Greuning 2005 186-7). Negative Goodwill With the issuance of these new standards there have been changes in accounting for negative goodwill. Prior to SFAS 142, negative goodwill was "was recorded as a deferred credit after reducing proportionately to zero the values of assets that would have otherwise been assigned to non-current assets" (Waxman 2001 19). Under the current standard, negative goodwill is still allocated to non-current assets, but the excess beyond these allocations gets recorded as an extraordinary gain on the income statement (Waxman 2001 19). Internationally speaking, prior to IFRS 3, negative goodwill was offset on the balance sheet (Corporate Finance, 2004, 42). Under IFRS 3, negative goodwill must be included on the income statement, and its inclusion on the balance sheet has been prohibited (Corporate Finance, 2004, 42). Reversal of Impairment Loss While impairment losses may be reversed under certain conditions, both international and US standards have disallowed the reversal of any impairment losses recognized for goodwill. Minority Interest Both US GAAP and IFRS require minority interest to be disclosed in the consolidated balance sheet, however, each has a different presentation. US GAAP requires minority interest to be presented outside of equity, either as a non-current liability or more commonly disclosed separately in between the liability and equity of the consolidated balance sheet. IRFS require that minority interest be reported separately in the equity section of the consolidated balance sheet, although it's commonly reported in between the liability and equity section, similar to many US companies. ...read more.

Figure 5 - Makeup of All Derivatives in US and Foreign Markets Conclusion In conclusion, the efforts made to converge international standards with those in the United States are evident in the accounting for business combinations and foreign currency transactions and translation. The issuance of IFRS 3 demonstrates the desire of the international community to conform their standards to those used in the United States. The IASB also recognizes the impact of the globalization of modern business and the benefits of increased comparability to financial statement users. There is still much room for improvement on this convergence project, but the benefits of convergence are clear and will ultimately provide investors with the utmost understandability and representative data possible. Reflection Overall our experience working on this project was a positive one. Most of us have little, if any experience dealing with International accounting standards, and when conducting research we were able to learn a great deal. Also from researching on international standards we were able to learn much about the history of international standards, including the formation of the International Accounting Standards Board (IASB). By identifying the similarities and differences between US GAAP and International Financial Reporting Standards (IFRS) it will help us track and understand the upcoming changes to each, in order to converge the two standards and better prepare us for the future. Over the course of this project we did have some trouble gathering updated information on the international standards. The IASB website was not very user friendly or helpful in identifying the recent changes. The most of our sources were from 2005 or earlier, so it was hard distinguish if there have been any updates to the standards since then. Overall this project was very useful and increased our understanding of not only international accounting standards but also US GAAP. As the business world continues to globalize, this project will benefit our careers and better prepare us for the future. ...read more.