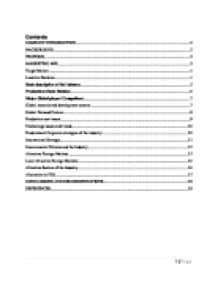 Contents COMPANY INTRODUCTION 2 BACKGROUND 2 PROPOSAL 3 MARKETING MIX 3 Target Market 4 Location Decision 4 Basic description of the Industry 5 Production Chain Division 6 Major Global player/ Competitors 6 Global research and development centers 7 Global Demand Centers 8 Production cost issues 9 Technology issues and trends 10 Predominant Corporate strategies of the industry 10 International Strategy 10 Governmental Policies and the Industry 12 Attractive Foreign Markets 14 Least Attractive Foreign Markets 15 Attractive Sectors of the Industry 15 Alternative to FDI 16 CONCLUSIONS AND RECOMMENDATIONS 17 REFERENCES: 19 COMPANY INTRODUCTION Gap is an American clothing and accessories brand based in San Francisco, California. The company has five primary brands: the namesake Gap banner, Banana Republic, Old Navy, Piperlime and Athleta. The five brands cater to a wide variety of needs. For example Banana Republic caters to more upscale customers. Old Navy is designed to appeal to families and younger customers by emphasizing "fun, fashion and value'. Gap has 3076 stores operating worldwide. Gap operates stores in the United States, Canada, the United Kingdom, France, Ireland, Korea and Japan. Gap also has franchise agreements to operate stores in various other countries in the Middle East as well as Singapore and Malaysia. BACKGROUND When sales in the US dropped, GAP started to shift its focus to international expansion. With time GAP has opened various stores across countries like Canada, Japan and Britain, as well as franchises in the Middle East. We feel that this would be a good time to penetrate into the Asian market. Pakistan would be the ideal place to use as a production and distribution base. GAP is trying to reverse a trend of declining sales by moving into overseas markets. GAP already has existing production centers in Pakistan. But GAP does not own these centers; they are local manufacturers with whom GAP has contracts. Levi's is also outsourcing from Pakistan but unlike GAP, Levi's is also selling its products in Pakistan. ...read more.

Other than this GAP has a tremendous name recognition in Asia where it is willing to invest heavily. By pushing into non-Western countries, Gap is hoping to sell masses of young, sophisticated Asian and Middle East shoppers on its trademark jeans, casual pants, and t-shirts. Besides planning on the Middle East outlets, Gap and Singaporean franchisee F.J. Benjamin expect to open stores in coming months in Singapore and Malaysia. Analysts believe that Gap has the potential to attract consumers in these areas. "Gap is recognized as a global brand," says Andrew Jassin, managing director of retail consultant Jassin-O'Rourke Group. "The fashion is translatable to many other markets and appeal to the largest segment of the market." GAP when expanding internationally opt for franchising out stores and not getting under the headache of owning foreign properties and getting too many employees directly under their payroll. Very recently GAP has announced a franchise agreement with a Dubai based retailer Al Tayer Group to open GAP and Banana Republic stores in five markets in the Middle East which include UAE, Kuwait, Bahrain and Qatar. Besides planning on the Middle East outlets GAP and a Singaporean franchisee F.J. Benjamin also expect to open stores in coming months in Singapore and Malaysia. GAP is trying to follow the example set by other American brands that have successfully expanded in Asia and the Middle East, such as Starbucks. GAP's current international expansion strategy of working with local franchisees reduces GAP's financial risks. Using franchisees, GAP is able to sell its brand and its clothing without the headaches of dealing with local real estate markets and hiring armies of store level employees onto its own payroll. But the distribution network and the advertising is handled by GAP itself in all countries. All of GAP's existing overseas stores in Britain, France, and Japan are owned and operated by franchisees. Though GAP is expanding in South East Asia and the Middle East it still doesn't have any announcements regarding expansion into China which leaves a GAP itself in GAPs international market. ...read more.

The government will also be more supportive as new facilities will create jobs for the people. Good terms with the government will help this project to be carried out smoothly. High capital costs mean there is a definitive risk attached to it. If things go wrong losses will be incurred. But on the other hand if this plan succeeds then GAP can not only gain a strong presence in the Pakistani market but also in other Asian markets. Greater risk means higher potential returns. The chances of failure are not very high according to our research. The energy crisis in Pakistan is a major hurdle to most industries these days. Electricity and gas shortage has been a real problem. But compared to other industries the textile sector is not being affected that much. So we think that GAP will do fine in Pakistan. The political instability of Pakistan is a factor. Taxes and duties are fluctuating. Government policies also change due to instability which is a potential hurdle. But usually Governments tend to favor foreign investors who create a lot of jobs for the people. The proposed factory will create many jobs. All in all there are many positives and some negatives too, but potential returns are high. Asia is a very good market and producing in Pakistan will help GAP increase its global presence. The success of this proposal can even enable GAP to become the global leader in Apparels. The stores in Pakistan are also going to be very profitable because there is brand recognition in the country, and the high proportion of youth and the brand-consciousness of the upper class will help earn huge profits. We recommend that GAP should go ahead with this proposal because it is a huge expansion internationally. International expansion has been a focus ever since sales went down in the US. Instead of waiting for sales to drop again, this time if GAP continues the expansion, it would prove to be a huge strategic advantage. The project is long term and commitment to the cause is required for this to be a success. ...read more.