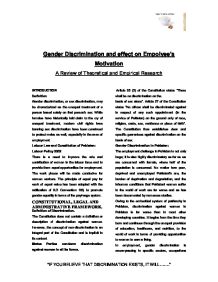 Gender Discrimination and effect on Empolyee(TM)s Motivation in Pakistan

A Review of Theoretical and Empirical Research

Labour Law and Constitution of Pakistan:

There is a need to improve the role and contribution of women in the labour force and to provide them equal opportunities for employment. The work places will be made conducive for women workers. The principle of equal pay for work of equal value has been adopted with the ratification of ILO Convention 100, to promote gender equality in terms of the pay/wage system.

States Parties condemn discrimination against women in all its forms.

basis of sex alone”. Article 27 of the Constitution states “No citizen shall be discriminated against in respect of any such appointment (in the service of Pakistan) on the ground only of race, religion, caste, sex, residence or place of birth”. The Constitution thus establishes clear and specific guarantees against discrimination on the basis of sex.

The employment challenge in Pakistan is not only huge; it is also highly discriminatory as far as we are concerned with female, where half of the population is concerned. No matter how poor, deprived and unemployed Pakistani’s are, the burden of deprivation and degradation, and the inhuman conditions that Pakistani women suffer in the world of work are far worse and as has been documented by numerous studies.

Owing to the embedded system of patriarchy in Pakistan, discrimination against women in Pakistan is far worse than in most other developing countries. It begins from the time they born and continues through the unequal provision of education, healthcare, and nutrition, to the world of work in terms of providing opportunities to women to earn a living.

In employment, gender discrimination is encompassing in specific sectors, occupations and wages rates. In Pakistan, women are mostly concentrated in the low productivity parts of all three sectors:  agriculture, industry and services. Women workers are majority in the informal sector where they are either self employed or wage workers.  In the formal, organized sector, women play a very limited role, occupying less than one-fifth of total public sector employment. The situation in the private sector has improved in recent years in banking sector especially (service sector), which have seen increasing demand for women workers.

Gradually, designated occupational distributions that presume certain occupations are for men are breaking down. Pakistani women now hold more positions of leadership or prestige in management than ever before. According to Opeke (2002), more female employees are gradually moving to management and decision-making levels. Although women’s participation in the workforce has grown steadily worldwide, existing gender inequalities have increased with respect to pay and working conditions.

First, we propose that job satisfaction and gender related research is needed in a rapidly developing country like Pakistan, because of its relationship to cost reduction through increased individual productivity, which in turn leads to economic and industrial growth. Since work is an important aspect of people’s lives and most people spend a large part of their working lives at work, understanding the factors involved in job satisfaction is crucial to improving employees’ performance and productivity. Second, this study is important, because in a rapidly developing country such as Pakistan there is a need to understand the attitudes of workers towards their work: determining the job satisfaction of male and female bank managers and Officers could lead to improvements in the workplace that would help them to remain satisfied with their jobs. Third, job satisfaction has often been linked to organizational commitment, turnover intentions, and absenteeism (Koh & Boo 2001).

These variables are costly to an organization, as they could lead to low morale, poor performance, lower productivity, and higher costs of hiring, retention, and training. Finally, from a practical standpoint, it is vital to provide practitioners with key information that could enable them to make informed managerial decisions in a work environment. The purpose of this study, therefore, was to investigate the impact of gender discrimination on the job satisfaction of male and female bank managers & Officers in Pakistan.

The research with the review of existing secondary information on gender discrimination research article.

Objectives of the study

The study has the following objectives.

Defining Variables Following are the diagrammatic elaboration of variable which we consider in research survey;

Data was collected from the Banking officers and managers of the organizations using interview questionnaires.

The data collected using the interview questionnaires was analyzed using Microsoft Excel. Using the excel spreadsheets, the averages and percentages were calculated and the tables, charts and graphs were designed. The analysis and the observations of the study are as follows.

The number of years spent in an organization is an age related variable that has a relationship to job satisfaction. It can predict the affective response to work; you can say positive feeling towards work. More ever, demographic variables, such as work experience, age and positive personal perception, enhanced job satisfaction. In fact, persons with more work experience had respect for their jobs, could apply their experience to that work, and might like the physical work environment because of staying in the organization from long time. Like employee working from past 20 years is more satisfied then an employee working from past 15 years due to know how of working and relationship. Managerial Rank

Many researchers have found positive relationships between education levels and job satisfaction (Rogers 1991). Falcone (1991)found that educated managers expressed more job satisfaction in both public and private sectors than less educated managers. Like during survey, a male working in HBL having 24 years of experience was positioned at operation manager, while female was promoted to branch manager with in 6 years of experience due to having sound education back ground and performance.

It is usually perceived that women employees or even the male employees as well are recruited, keeping in mind their geographical and family background (Bourgon.J 996), but on the basis of the study the reality seems to be different. Only some (22% that is Bank Alfalah Ltd, Habib Bank Ltd and National Bank of Pakistan) consider the background while others don’t. it shows that the perceptions related to such phenomenon are no more valid.

In the literature it is mentioned many a times that women are lagging behind due to their family responsibilities and career breaks, but this is not the case in the organizations studied in this survey. The results show that the men and women are being treated equally in performance appraisal management and friendly family policies.

Flexible hours are very important for organization to retain its qualified employee. In survey we found that, 60 % men and women treated equally, 37 % Men are treated less favourable, and 3 % Women are treated less favourably.  The result show that women are favoured more in flexible hour as compare to men which can be demotivation for male employee in the organization.

Remaining research shows that there is gender discrimination in work setting rather it is not much more then 5 years before, women are discriminated on the basis of burden of work, responsibility, empowerment, red tapism, and French leaves. Because of stereotype nature, the organization thinks that women are much more able to do work such as customer relation officer, credit control officer, receptionist, because of their attractive look and good inter personal communication skills. But at one side, women are given facilities like, Flexible working hours, Family Friendly policies and good remuneration. So in nutshell the effect of both sides is null and if they found discrimination then they prefer to go to HR department rather then Head of Department.

Harassment in the workplace affects businesses, managers and employees, and preventing managers and employees from focusing on the organizational primary objectives. In banks there is a strong harassment policy which has eliminated such concept. Today men and women work together in very respectful environment, helping each other to achieve pre established goals. These measures also increase the productivity and retention ratio of employees.

The contemporary equity theory of motivation argues that a major input into job performance and satisfaction is the degree of equity (or inequity) that people perceive in their work situation (Luthans, 180).  As a result, motivation is heavily impacted by things like cognitive dissonance and the exchange theory.  The theory is congnitively based because it focuses on the thought processes and perceptions of the employee.  Inequity occurs when an employee perceives his/her outcomes to inputs and the ratio of a coworker's outcomes to inputs to be unequal and can be schematically represented as follows:

The aim of the study was to explore various factors that might be under consideration of the employers, while making recruitment decisions, remuneration, appraisal performance, training and development, promotion, access to database, flexible working hour, friendly policies, department support and policies procedures, handling the gender issue. In the study general trends were analyzed regarding the qualification levels of the female employees i.e. whether they are equally capable and equipped with academic qualifications as well as the personality attributes. The personality traits were analyzed based on the perceptions of the employers. What they think of the females in terms of making themselves fit and value able in the organization, as well as fulfilling the job requirement? How good they are making themselves, mixed up in the organizational environment, with other fellow employees, peers, boss, subordinate etc? How they balance their work life with their official responsibilities? Is their any lack of commitment, seriousness or motivation making them as a less preferred resource or vice versa? The research confirmed that there is no obstacle in the career path of a woman as far as their personality attribute and academic requirements are concerned. Most of the employers do not consider the social, geographical background of the employees, so it proves that cultural issues or the perceptions regarding any of such issues are not cause of hindrance in the way of women work force. Another dimension analyzed was regarding the facilities and relaxations provided by the employers to their workforce that might make the opportunities easier to avail for the women especially and all other employees generally. The departmental support, promotion, training and development are given less to female members as compare to male members.

Regardless of all the above mentioned factors it was evident that the departments headed by the females are not equal to the ones headed by the males. It was further noticed that the environment had not much positive impact having female bosses like in male bosses. This phenomenon was associated to their better disciplined personalities and leadership styles of males as compare to females.

The whole  study and its results  are not yet so reliable  and generalizable, due  to the fact  that  the  sample size is not sufficiently large, as it is compare to the whole population.

Following are the recommendations made from above conclusion.

“IF YOU BELIEVE THAT DISCRIMINATION EXISTS, IT WILL…….”