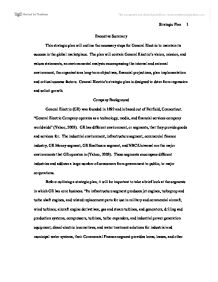 GE also maintains it's technically competitiveness by reshaping GE as the market has evolved. "Since 2002 GE has exited businesses with $50 billion in revenues and entering businesses with $80 billion in revenues" (GE, 2008). This type of creative thinking has kept GE at the forefront in global marketplace while providing value to their investors. Strengths and Weaknesses General Electric must also address its weaknesses and solidify its strengths. General Electric's core competencies lie in several areas across different segments and environments. General Electric's strengths are distributed across all the core competencies. This enables GE to address a single strength or weakness while correcting multiple environments. Some of GE's strength's are, "Strong implicit and explicit parent support, consistent earnings and asset quality performance generated, diversified asset base and earnings sources with increased transparency, strong and seasoned management" (GE, 2003). These are just a few of GE's strengths however; these strengths lay at the core of GE's business. GE is not without its weaknesses as well, which can also be visualized as risk to the organization. These weaknesses are "aggressive, but improving use of financial leverage, highly acquisitive posture, exposure to systemic capital market shocks because of large and continuous funding requirements, limited financial flexibility with regard to investments in regulated subsidiaries" (GE, 2003). Addressing these weaknesses will solidify the core businesses and segments that GE operates in. Eliminating the weaknesses of the organization increases the likelihood of success at future opportunities such as development of green technology, reduction in energy consumption, and achievement of the company's economic objectives. The success of these opportunities will ensure that General Electric remains a stable and secure company within the industries they operate. Long-term Objectives Long-term objectives are statements of the results a firm seeks to achieve over a specific period, usually three to five years. Strategic managers recognize that short-run profits are rarely the best approach to achieving and sustaining corporate growth and profitability. ...read more.

Each has about 20 members from around the Company that meets regularly to learn from each other, challenge each other, and root for each other" (GE, 2008). The Commercial Council was formed in 2003 as a result of historically slow growth rates. The council focused on developing processes that would attain the desired revenue growth of 2 to 3 times the GDP growth. The organization believes that "at 8% organic growth, we would be safely ahead of our financial and industrial peers" (GE, 2008). The results of these councils have been positive. The council has led the "Growth as a Process" initiative which has resulted in the increased revenue growth the company was looking for. General Electric has oultined specific and attained longterm financial goals that will require close monitoring and evaluation. Traditionally stock price is based upon the financial strength of the company therefore, General Electric must ensure that it achieves the financial growth it has outlined. In order to keep General Electric on track, the leadership should ensure that internal controls are in place to prevent excess spending and fraud. General Electric should also have external controls, through an independent auditor, to ensure that General Electric is on track to meet the objectives the leadership has announced. Conclusion General Electric is one of the world leaders in innovation and even a company as large and stable as GE needs a sound strategic plan. A strong plan allows GE to stay ahead of the changing marketplace and identifies key areas of success and improvement. GE's strategic planning process outlines longterm objectives for the organization, contrl measures, the factors critical to the future success of the organization, and developed attainable financial projections. General Electric is a leader in the technical, social, economic and competitive aspects of the industries in which they operate. The CEO and Board of Directors have developed a plan that will meet the goal and objectives outlined in the strategic plan. General Electric's strategic planning is effective and efficient and keeps GE atop the global marketplace. ...read more.