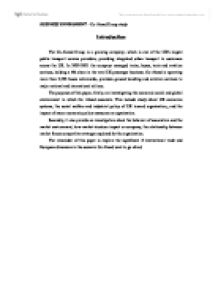 Introduction The Go-Ahead Group is a growing company, which is one of the UK's largest public transport service providers, providing integrated urban transport to customers across the UK. In 2000-2001 the company managed trains, buses, taxis and aviation services, holding a 6% share in the total UK passenger business. Go-Ahead is operating more than 2,500 buses nationwide, provides ground handling and aviation services to major national and international airlines. The purposes of this paper, firstly, are investigating the economic social and global environment in which Go Ahead associate. This include study about UK economic systems, the social welfare and industrial policy of UK toward organization,, and the impact of macro economic policy measures on organization. Secondly, it also provide an investigation about the behavior of association and the market environment, how market structure impact on company, the relationship between market forces competitive strategy employed by the organization. The remainder of this paper is explore the significant if international trade and European dimension in the scenario Go Ahead want to go abrod. Case study 1. How UK economic system attempt to allocate and make effective use of resources: In the UK, public transportation is privatized and led to free market-oriented. In 1986, bus and public transport companies were privatized and deregulated. They know that as suppliers compete for market share, the competitive market of the deregulated bus can bring benefits to customers. Deregulation gave bus companies the freedom to set where and when bus services could operate. The local government is no longer control this. Nonetheless, in order to survive, private companies must identify customer's needs and wants, and offer them value for money. However, transport growth is responding to the economic success, the opportunities of globalization, the improvement of living standard and economic competitiveness with other countries such as France, United Stated.... In the case of public transport, it could be argued they should not be too expensive otherwise people cannot afford them. ...read more.

However, high sterling value can make UK company less competitive with overseas companies, but it do not affect a lot to transport company. 4. Market structure impact on the company: In UK, bus industry is deregulated to create competitiveness in market. Nonetheless, the fact is that public transport industry is a pure competitive market. Example in bus scenarios, after 1986, many local companies were independent, but was short lived. They were acquired by the emerging large private bus groups: Arriva, ComfortDelGio Corporation, First Group, Go - Ahead Group, National Express Group, Stagecoach Group and Transdev. This oligopolistic market exists with a few large companies dominate. Although some small companies still exist in the market but they have small influence in market share. The importance of an oligopoly is that any activity in one large business can impact on the other, encourage them to respond similarly. When one company, drive down the price, there will be responded by the others. One minor is that, businesses may compete in marketing of services, rather than prices. This cartel to maintain high profit level, might decide with other competitors or their subsidiaries compete ineffective to share the market, create entry barriers to small company to operate market sharing, and agree common transport prices. In order to stop fixing prices and allocating market share, The Office of Fair Trading (OFT) are found to investigate company's activities by Competition Act, anti competitive agreements and fines companies break the law. An example is Starcoach, one of Go Ahead competitor. In the late 1998, OFT accused it of being involved in agreement with 12 other local bus operators to fix prices and allocate market share in the home-to-school buss services in Kingston upon Hull (Harris, N., 2001). With a commitment is having social responsibilities, the company must take care and treat its customers right. 5. Illustrate the relationship between market forces and association: Awareness of five Porter's forces can have company more understand the structure of its market improve its position to a new one more profitable and less vulnerable to attack. ...read more.

The commitment made by the car industry associations ACEA, JAMA and KAMA, is trying to reduce CO2 emissions from new vehicles to 140 g per km by 2008 (ACEA) and 2009, respectively (EC, 2006). The Euro 5 and 6 standards also published for every people in Europe and work .In addition, the EU creates strategy in favor of biofuels, promoting the use of fuels in order to reduce greenhouse gas emission, and the environmental impact of transport. When take part in EU market, Go-Ahead must follow the EU legal. What's more, it has to update and make sure their buses and coaches can approach new standard and regulation to achieve EU's objectives. .However, because the company takes environmental responsibilities on its business, uses ultra-low sulphur diesel to cut exhaust, it will have many advantages when operating. 8.2 The Single Market policy: This policy plays a vital role in European economy. The Single Market Act, which came into force on July 1st 1987, concern in 3 main categories: removing physical barriers, technical barriers and fiscal barriers (The Economist, To take part in Single market, European member states' effort to remove the barriers created by different national regulations and standards, harmonize national standards and replace them by a mutual national standard - European standard. There are minimal different between domestic movements and cross-frontier movement within Single European Market. It will also establish a common market for many services such as transport, banking... When many different markets co-ordinate to each other and become similar, Go - Ahead now has a big challenge and opportunity to do business in others countries within EU. Conclusion In present, Go Ahead is a leading provider in bus, rail and aviation service in UK. Though UK market is a pure competitive market, it has lots of opportunities to improve due to UK government support. Business activities of company can be affected by UK policy. Thus, the company must always concern and have an appropriate strategy for company. Moreover, in the age of globalization, the company has not only opportunities to improve, but also big challenges to deal with. ...read more.