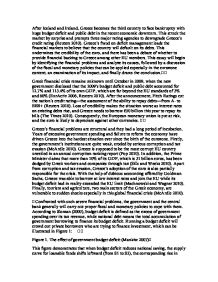 Greek Financial Crisis. This essay will begin by identifying the financial problems and analyze its causes, followed by a discussion of the fiscal and monetary policies that can be applied especially in the eurozone context,

After Iceland and Ireland, Greece becomes the third country to face bankruptcy with huge budget deficit and public debt in the recent economic downturn. This struck the market by surprise and prompts three major rating agencies to downgrade Greece's credit rating (Reuters 2010). Greece's fraud on deficit management leads the financial markets to believe that the country will default on its debts. This undermines the credibility of the euro, and there has been a debate of whether to provide financial backing to Greece among other EU members. This essay will begin by identifying the financial problems and analyze its causes, followed by a discussion of the fiscal and monetary policies that can be applied especially in the eurozone context, an examination of its impact, and finally draws the conclusion.?? Greek financial crisis remains unknown until October in 2009, when the new government disclosed that the 2009's budget deficit and public debt accounted for 12.7% and 113.4% of its own GDP, which are far beyond the EU standards of 3% and 60% (EurActiv 2006, Reuters 2010). After the announcement, Fitch Ratings cut the nation's credit rating-the assessment of the ability to repay debts-from A- to BBB+ (Reuters 2010). ...read more.

?? On the spending side, the government will reduce its own operating expenses, consumption and social welfare while public investment is cut by more than a half (smh 2010). On the tax revenue side, Greek government has applied hard new tax evasion rules that hike consumption taxes and value added tax on fuel, tobacco and alcohol (CNN 2010). In the deficit cutting proposal, �2.4 billion additional revenue will generate from numerous tax evaders and evasive social security payments (Sills and Weeks 2010). By taking these steps, the government hopes to slash the deficit below the 3% EU limit by 2012 (smh 2010). However, the fiscal solution is difficult and politically unpopular to implement. It is estimated by the OECD that the cost of healthcare and pensions between now and 2050 will rise by 16.8 percent of GDP in Greece, which is much bigger than other EU members (Elliott 2010). Thousands of Greek civil servants went on a 24-hour strike by means of closing schools and grounding flights after the government revealed detailed measures of the deficit-reduction package (Reuters 2010). Yet positive signal shows the government's proposal works somehow as its deficit has dropped in January (Reuters 2010).?? ...read more.

The implementation of the aid plan, nevertheless, remains uncertain and eurozone countries are likely to adopt flexible approaches to assist Greece and other countries that encounter sovereign debt crisis (Willis 2010).?? To conclude, severe corruption and tax evasion along with adoption of the euro and its special economy structure lead to the huge budget deficit and public debt occurred in Greece in 2009. This damaged the government's credibility on loans and drove the economy into crisis. Greece's financial crisis also sent the euro into trouble with the risk that the euro will depreciate and even vanish as a reserve asset. In order to tackle this crisis, the Greek government has toughly carried out austerity fiscal policies that reduce government spending and raise taxes despite its political unpopularity. As a member of the European Union, the Bank of Greece cannot use seignorage to finance Greece's budget deficits by printing money. However, the EU and IMF are said to offer Greece a �45 billion rescue package to help Greece get through this current crisis. Yet the implementation of the bailout remains uncertain and Greece still faces the threat of going bankrupt. ...read more.