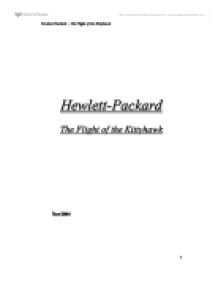 Hewlett-Packard - The Flight of the Kittyhawk

Hewlett-Packard The Flight of the Kittyhawk Nov2004 TABLE OF CONTENTS TABLE OF CONTENTS 2 INTRODUCTION 3 I. High potential of the DMD and the project 4 1. Place of HP through DMD in the disk drive market 4 2. An innovation: the Kittyhawk 5 3. Flexibility of a start up and resources of a big structure 6 II. The reasons for failure 7 1. Sustaining versus disruptive innovation 7 2. The target market 8 3. The strategic objectives 10 III. The Kittyhawk should have been considered as a disruptive technology 11 1. Defining the disruptive product 11 2. Which markets and which objectives? 12 3. The implementation of the Kittyhawk project 13 CONCLUSION 15 INTRODUCTION The technology industry is a market of change, due to innovative breakthroughs. But for the firms in this sector, the challenge is to predict success. The disk drive industry provides some characteristics of how changes can cause certain types of firms to succeed or fail in choosing for instance a disruptive or a sustaining innovation. HP was founded in 1939 by Bill Hewlett and Dave Packard. Their first product was an audio-oscillator, built in a Palo Alto garage. HP growth was driven by several innovations in high technology over so many decades. Today, HP is a leading global provider of computing and imaging solutions and services, which is focused on making technology and its benefits accessible to all. HP is still a company of inventors led by Carly Fiorina; Chairperson and CEO. In 1992 Hewlett Packard had four major business organisations (Test and Measurement, Computer Systems, Measurement Systems and Computer Product). Among the different groups of the Computer Products organisation, we could find the Mass Storage Product Group, which contained the Disk Memory Division (also called DMD), responsible for developing and launching disk drive models. The Kittyhawk was a disk drive that HP designed to be the need of next-generation. ...read more.

There was a mismatch between the innovation and its deployment. The Kittyhawk team planned to offer the innovation to its most demanding customers who still were unsatisfied with the performance of the product they were purchasing. The Kittyhawk team had to weigh up its market options: - either a disk drive specifically focused at the mobile computing market (to DMD's existing customers) or, - A drive so inexpensive that it could be used in applications where disk drives previously had not been economically feasible (explore emerging opportunities elsewhere). They thought "that the PDAs would be the next bigg thing to hit the market" the Kittyhawk's marketing staff was projecting the next 2 year demand from the PDA market to be over 500 000 units. At the end OEM was pricing high volume at about $250. However, they were interested by Nintendo. The leading video game manufacturer told them that if the Kittyhawk's team could supply a 1.3" drive for $50, then they would be interested in purchasing millions of units for their gaming cartridges. Nintendo needed to have more cheap storage, for their more complex games. This challenge, designing a $50 drive, seemed to be unrealistic for Seymour (he was the program manager from R&D, leader of the project team) and White (he was the marketing manager of the team), and "would require a significant design breakthrough". The team, in order to meet the requirements of the Kittyhawk potential customers, needed to develop three technologies like the accelerometer (3-foot drop of capacity), a new substrate material for disks, and a new level of integration for Kittyhawk's electronics (the 1.3" module would use less power, be lighter, and manufacturable at lower cost). The specificity of the 1.3" drive should have at least 20 megabytes of storage. As a result, HP decided that its small disk should target the PDA and ultrathin laptop market rather than the video game manufacturers. ...read more.

They should have reduced the revenue rate, the revenue growth rate and the break even time which were too high for a disruptive technology. Moreover the Kittyhawk team was composed of manufacturers, marketers and researchers, but the team lacked real engineered salesmen. They stayed on a passive position expecting the customers to find their needs by themselves, instead of proving and demonstrating to them the interest they could find in this new technology. After the analysis of the characteristics of the product, the marketers would have thought of a global sales strategy. Setting up a proactive operational planification would have led them to a better global vision on the feasibility of their Kittyhawk project. CONCLUSION As a conclusion Hewlett Packard structure through Disk Memory Division offered an efficient basis for the flight of a new product: the Kittyhawk, planned to become the smallest hard drive in the world, with a size of 1.3". Thanks to a well-constituted team, composed of the best managers from HP, the project made a good start. They benefited from huge financial resources, an appropriate management, such as autonomy of decision-making, Management By Objectives, Management By Wandering Around, strong support from the CEO, etc. Although their first objective was to create a disruptive technology, they failed because of their lack of vision. Indeed they stuck to their traditional launch strategy, adapted to sustaining products. Regarding a disruptive technology, they set up objectives in terms of revenue rate, growth rate and break-even time which were too high. They should also have been more flexible. In addition they had not precisely determined the right positioning of the Kittyhawk related to the adapted target market. Before launching the product they should have established strong partnerships to be sure of selling their hard drives. Eventually the Kittyhawk did not take off, which led to other failures for Hewlett Packard. For instance because of the mobilisation of the best DMD labour forces to this project the division missed the launch of the 4Go hard drive. ?? ?? ?? ?? Hewlett-Packard - The Flight of the Kittyhawk 1 ...read more.