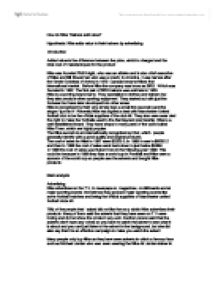 How do Nike Trainers add value?

How do Nike Trainers add value? Hypothesis: Nike adds value to their trainers by advertising Introduction Added value is the difference between the price, which is charged and the total cost of material inputs for the product. Nike was founded Phil Knight, who was an athlete and is also chief executive of Nike and Bill Bowerman who was a coach, in America. It was names after the Greek Goddess of victory in 1972. Canada became Nikes first international market. Before Nike the company was know as BRS. Which was founded in 1962. The first pair of BRS trainers was sold late in 1963 Nike is a sporting brand name. They specialise in clothes and trainers but they also produce other sporting equipment. They started out with just the footwear but have later developed into other areas. Nike is recognised by their very simply logo a small tick (swoosh) and the slogan "just do it". Recently Nike has signed a deal with Manchester United football club to be the official suppliers of the club kit. They also were awarded the right to make the footballs used in the Barclaycard premiership. Nike is a well-established brand. They have shops in many parts of the world called Nike Town, which are highly popular. The Nike swoosh is an internationally recognized symbol, which people generally identify with a good quality and original products. The cost of sales for Nike in 1997 were $5503.0, in 1998 it rose to $6065.5 and then in 1999 the cost of sales went back down to just below $5494 In 1998 the cost of sales was higher then in the following year 1999. ...read more.

This is the process that Nike go thought to come up with a new design and to produce each pair of trainers. Just over 50% of the people that I asked, "what do you like about Nike?" answered the uniqueness and the originality of all the products. Due to this uniqueness Nike Logo Nikes 'Swoosh' mark (the curly tick, which provides a unique identity for the brand name). The power of the Swoosh is complete different from that of other brands. If I were to sum up the Swoosh in one word it would have to be energetic. Motivational symbols, which are at the border of ambiguity and transparency, make identities, which consumers like to wear. They are becoming some of the most valuable properties in the fashion business Only 29% of the people I asked were prepared to pay more for the logo. The origin of the Swoosh It was 1971 and Phil Knight was supplementing his modest income from Blue Ribbon Sports Inc. by teaching at Portland State University. There he met Carolyn Davidson, a graphic design student. He offered to pay her a couple of dollars per hour if she would come up with some design work for his small company. She came up with many different designs, which Knight was not satisfied with but Knight was up against a deadline; shoeboxes that were to include the new logo were waiting to be printed, so he had to make a decision. ...read more.