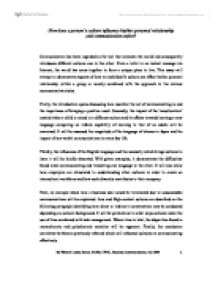 How does a person's culture influence his/her personal relationship

How does a person's culture influence his/her personal relationship and communication styles? Communication has been regarded as the tool that connects the world and consequently introduces different cultures one to the other. From a letter to an instant message via Internet, the world has come together to form a unique place to live. This essay will attempt to demonstrate aspects of how an individual's culture can affect his/her personal relationship within a group or society combined with the approach to the various communicative styles. Firstly, the introduction opens discussing how essential the act of communicating is and the importance of bringing a positive result. Secondly, the impact of the 'acculturation' created when a child is raised in a different culture and its effects towards learning a new language comparing an infants capability of learning to that of an adults will be examined. It will be assessed the magnitude of the language of silence in Japan and the impact of non-verbal communications in every day life. Thirdly, the influences of the English language and the necessity which brings cultures to learn it will be briefly observed. With given examples, it demonstrates the difficulties found when communicating and translating one language to the other. It will also show how employers are stimulated to understanding other cultures in order to create an intercultural workforce and how such diversity contributes to their company. Next, an example about how a business deal could be terminated due to unsuccessful communications will be explained. ...read more.

Remarkably, no less than seventy five per cent of all communications has been shown by scientists to be non-vocal (Trompenaars & Hampden-Turner, 1997) which is amazingly surprising by the fact that in western societies, verbal communication is chiefly used and tends to broaden their culture throughout the world. As part of verbal communication, English became the standard language taught in most places for the purpose of connecting the world. Together with the Internet and other sources of technology they play a crucial role aiming to bring cultures together. It can be observed commonly in Oriental societies, that articulation, that is the proper way of pronouncing words when speaking, is mainly noticed. This cultures find it fairly challenging because their language is rather complex. In studies carried out by Trompenaars & Hampden-Turner (1997) shows how the tone of voice develops when speaking. By using diagrams it can be noticed ups and downs (word stress and intonation) illustrated for Latin and Anglo Saxon countries whereas in Oriental societies they do not display as much in variation. Thus, this reflects on an additional influence determining whether communication is accomplished or not. The less people articulate, when speaking English, the lower the voice tends to sound and the more intimidated they may feel. In English culture, people express themselves mainly verbally, hence the necessity of speaking loud and clear. Communications can often be misleading if cultural differences are not taken into account. ...read more.

Lately, the perception of new horizons caused managers to realize how an intercultural workforce is appreciated in international companies. It was assessed how misunderstanding, due to miscommunication can substantially affect the process of business dealing and a person's personal relationship. Unmistakably, learning another language, for example English, became a significant tool in order to bring cultures together. Meanwhile, as mentioned, to translate a message in a conversation may not produce the same meaning as the receiver may have expected or as it was intended In some cultures, time may be of fundamental importance, or in others not so influential. In general, western societies are responsible for the advent of globalization as a phenomenon which brings different cultures together through sources including from eating at McDonald's restaurants to communicating via the Internet. Nowadays, people are more than ever connected to the world and technology has played an important role which affects such modifications. Considering these facts, it can be assessed that in the past, people experienced more difficulties communicating with each other as a result of the lack of such efficient resources. Therefore, the arrival of new technology has helped on connecting people more often than in the past. There are many factors which apply on influencing the communication between distinct cultures; the world does encounter cultural difficulties when it comes to communicating effectively. Overall, the important issue to bear in mind is that culture is not supposed to become a barrier with the intention of obstructing communication between countries with different backgrounds. People are granted with education, norms and beliefs and that is an exclusive component in their lives. ...read more.