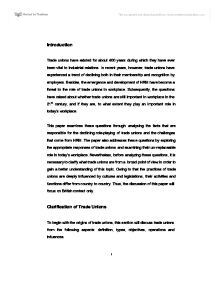 HRM as a threat to Trade unions.

Introduction Trade unions have existed for about 400 years during which they have ever been vital to industrial relations. In recent years, however, trade unions have experienced a trend of declining both in their membership and recognition by employers. Besides, the emergence and development of HRM have become a threat to the role of trade unions in workplace. Subsequently, the questions have raised about whether trade unions are still important in workplace in the 21st century, and if they are, to what extent they play an important role in today's workplace. This paper examines these questions through analysing the facts that are responsible for the declining role-playing of trade unions and the challenges that come from HRM. The paper also addresses these questions by exploring the appropriate responses of trade unions and examining their un-replaceable role in today's workplace. Nevertheless, before analyzing these questions, it is necessary to clarify what trade unions are from a broad point of view in order to gain a better understanding of this topic. Owing to that the practices of trade unions are deeply influenced by cultures and legislations, their activities and functions differ from country to country. Thus, the discussion of this paper will focus on British context only. Clarification of Trade Unions To begin with the origins of trade unions, this section will discuss trade unions from the following aspects: definition, types, objectives, operations and influences. Origins of Trade Unions The history of trade unions can be traced back to nearly 400 years ago when such groups as the Craftsmen and the Levellers were organised to protect their own products and interests. ...read more.

Similarly, trade union recognition also declined from 66% to 45% between 1984 and 1999 (Cully 1999). The decline of trade unions can be attributed to a number of factors, which have threatened the traditionally vital role of trade unions in workplace. One of the reasons is the significant changes in employment structure. After the World War II, the number of women at work, part-time workers and non-manual employees all increased. Nevertheless, these increasing groups are usually regarded as having less willing to carry out collective action. In addition, the privatisation has weakened the important position trade unions have ever held in public sector. In terms of 'business cycle', the trade union membership fluctuates with market prices, wages and unemployment (Waddington and Whitson, 1995). In this respect, the high rate of unemployment between 1979 and 1986 contributed to the decrease in the number of union members, while the increases of wages, at least for the white-collar workers in recent years, might have reduced their incentives to join trade unions. Moreover, the government policy between 1979 and 1997 not only was unsupportive of trade union activities, but also had directly weakened the collective bargaining power of trade unions. Meanwhile, yet, Thatcherite 'enterprise culture' facilitated the introduction of new management concepts, such as HRM, TQM and JIT (Ackers et al, 1996: 5). These new management concepts have greatly challenged the functions of trade unions. In parallel with these concepts, the term 'employee relation' took the place of 'industrial relation', placing emphasis on 'individualism' rather than 'collectivism'. Last but not least, the pressures from intense competition due to globalisation and economic recession have led to de-recognition of trade unions by employers. ...read more.

and paternity rights, paid holiday, the minimum wage and normal working hours, and these should be applied equally to full-time or permanent and part-time or temporary employees (TGWU 1993 cited in Ackers et al., 1996). Despite that the political context in the certain period was not favorable, trade unions have been still successful in resolving these issues. For instance, in 1997, the incoming Labour government promised the 'fairness' in workplace the unions advocated (Blyton and Turnbull, 1998). To sum up, although trade unions have been facing with many challenges in recent years, they have made appropriate responses to maintain their important role in today's workplace in terms of achieving flexibility, enhancing financial performance as well as protecting employee equal rights. Conclusion Due to the changes of the composition of workforce, economic conditions, the political environment, and the threat of HRM, trade unions have suffered a decline in membership and recognition in the last two decades. Nevertheless, the role and influence of trade unions in workplace have kept a remarkable stability (Godfrey and Marchington, 1996). Furthermore, acknowledging today's reality, they have adopted an individualistic approach to union membership in workplace through cooperation with organisational management and single-union deal with employers. These timely responses helped them maintain their important roles in the workplace. Realising the challenges and difficulties which still exist for trade unions, they can be expected to continue promoting partnership and to make both employees and employers to understand the significance of being involved in trade unions in the process to achieve high performance. It is suggested that trade unions, in cooperation with other management concepts, could make great contribution to organisations' prosperity as well as optimum, in terms of social, financial and political, satisfaction to workers. ...read more.